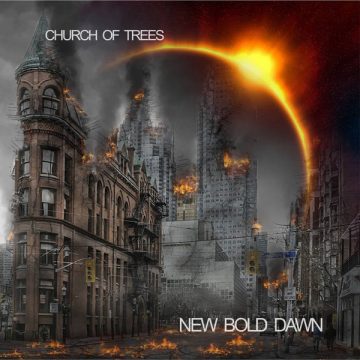 Church Of Dreams is the brainchild of musician/writer/producer extraordinaire, Bernard Frazer. Since their debut EP in 2017 (Primitive Creatures), he has consistently come up with some of the finest electronica being created today. Church Of Dreams’ music is based around very strong melodies, great lyrics, and stellar production and arrangements.

For New Bold Dawn, Frazer is joined by two very strong vocalists, Allison Stanton and Tara Hope, but on this album, he finds his own voice as well. His vocals are much more present than on their debut full-length album, The Dark And The Light (2018). While Stanton and Hope are fantastic singers, Frazer’s presence adds a new dimension to the group’s overall sound. The three together sound incredible. Overall, the album sounds powerful.

Lyrically, the album shines. Its timing is also perfect. The themes here circle around isolation, despair, and a somewhat post-apocalyptic world. Listen to  “End Of Days” with the incredible lyrics “Stores are empty, bars are closed/Apocalyptic tears, who knows”. Elsewhere, the album is very much like an extremely good science fiction film. The lyrics are very descriptive and do play out like mini-movies as one listens to them.

Having said that, this is still a remarkably great dance album. Several of the tracks could easily be remixed for club play and quite frankly, with the harder-edged sound on New Bold Dawn, I think it will play well in clubs and on the dancefloor. It reminds me of the classic 1980s albums that were perfect for dancing but could also be equally enjoyed just listening and focusing on the lyrics. This is not an easy task, but Frazer has pulled it off.

That is not to suggest this is a retro-sounding album, the opposite is true. New Bold Dawn is futuristic. Frazer is taking electronica and dance music into new directions and new areas. His blending of vocals, strong lyrics, strong melodies, and strong beats equal a remarkably strong album. New Bold Dawn is a brilliant album, and perfect for these anxiety-ridden times.

Born and raised in Whitby, Aaron discovered music through his love of The Beatles. This led to a career in radio, writing for various publications, and ultimately a radio show about The Beatles (Beatles Universe), which ran for over four years. When not immersed in music, Aaron enjoys spending time with the loves of his life -- his wife Andrea, and daughters Emily and Linda (all of whom have an intense love of music too).
RELATED ARTICLES
album reviewalbum reviewschurch of trees
8.0