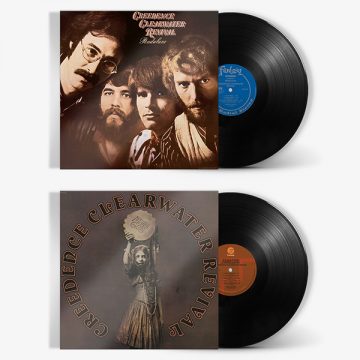 Creedence Clearwater Revival or CCR, if you will, ruled the airwaves and record players when psych rock was on the rise and prog rock was scoffing at their ‘simple’ sound.

You could call the CCR sound simple, but as some music legends say, ‘simple’ is the hardest thing to play and get right, yet John Fogerty and CCR got it right. That is why they were not only successful then, but still have the sound that keeps cropping up and actually turns out to be quite timeless. This double special vinyl reissue of their last two albums Pendulum and Mardi Gras goes on to prove it. Well, partly.

Pendulum as an album didn’t catch as much fire as their previous releases did. Part of the reason may lie in the fact that it was originally released the same year as Cosmo’s Factory, considered as their best album. But then, Pendulum is their only album with all original material and includes two of their biggest single hits, “Have You Ever Seen the Rain” and “Hey Tonight.” The songcraft is at its height, so is the musicianship. Possibly a neglected masterpiece.

Not exactly the case with Mardi Gras. Tom Fogerty was gone, and he might not have been as important for the band as his brother John was, but on the evidence of this album he seems to have been the adhesive that held things together. Doug Clifford and Stu Cook had the freedom to compose and sing, and they were a brilliant rhythm section but not exactly great songwriters or singers. Still, there’s enough goodness here to make shame of quite a few prog outings that got precedence at the time.

Formerly a lot of things, including a journalist and a translator, currently a freelance writer living in The Netherlands.
RELATED ARTICLES
album reviewalbum reviewsccr
9.0