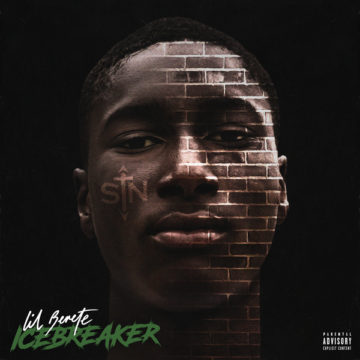 Things are moving fast for young Toronto rapper Lil Berete, with some strong singles over the last year or so now followed by his debut album, the eight-track mixtape Icebreaker, mostly just down to him but with contributions too from JoEazy and Acerr, the latter important as he was the original inspiration for Berete to freestyle; also, Berete is from Toronto’s Southside, as opposed to Acerr’s Northside (check out Berete’s earlier singles for more info), and as the cover shows, he is trying to forge links between the two Projects. Our man’s raps are strictly urban, with a distinctive flow, a little auto-tune and forthright, realistic and not always comfortable lyrics over memorable and frequently catchy beats from the younger breed of talents such as L.A.s famed Kenny Beats (listen to “Dreams”), Toronto’s own Patrick Carmelo, and the grime-inflected Dutch producer Diztortion. Check out his raw videos too. At a time when people are talking about rap devolving and losing its magic, Lil Berete lives the life, walks the walk, and shows there’s plenty of good things still around.

Norman Darwen grew up in north-west England admiring Elvis’ gold lamé jacket, Lord Kitchener’s way with words, and his much older brother’s and sister’s dancing to The Rolling Stones’ ‘Little Red Rooster’ on the telly. He’d wind aforementioned brother up by reading the entire contents of an R’n’B magazine he used to have to collect from his local shop for him and then reciting back as much as he could remember. Some years later he’d wind up his own friends by telling them who these people were that Led Zeppelin etc were covering – Willie Dixon, Howling Wolf, Otis Rush etc. These days he still listens to the blues, but has added a taste for reggae, zouk, rap, folk and anything else that takes his fancy…
RELATED ARTICLES
album reviewalbum reviewslil berete
8.0