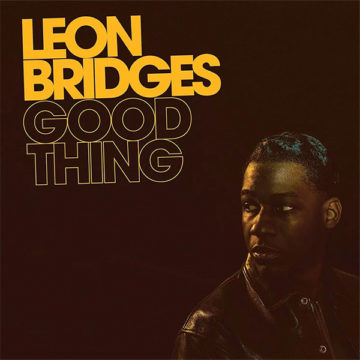 Make no mistake, soulful rhythm & blues singer Leon Bridges is by no means the finished article, and on his sophomore album he has decided to take the type of risks often characterized by young and ambitious performers. These risks don’t always pay off, but they are the risks that needed to be taken in order for Bridges to truly fulfill the potential that both his voice and his ear for traditional R&B have in abundance.

Given the depth of soul that Bridges is capable of coating his vocals in, it’s unfortunate that he decided to begin Good Thing with falsetto, as it’s a jarring and uncomfortable tone-setter. Thankfully, second track “Bad Bad News” is an instantly recognizable slice of Bridges’ best blues vocals, and that quality carries over into both “Shy” (even if the lyrics are a bit cringeworthy) and especially the album standout, “Beyond”. From that point onwards, there is a real case of sonic and production identity crisis on Good Thing in that the albums swings from uber-polished and radio-friendly pop-styled songs like “Forgive You” and “If It Feels Good (Then It Must Be)” to much more organically authentic-sounding songs like album closer “Georgia to Texas”. These are the drawbacks that accrue when attempting to take risks with your own sonic identity, and no doubt they will help Bridges commercially (in terms of radio friendliness) but they do little to lend validity to the true power of his voice, which is firmly rooted in blues and soul.

In all, Good Thing is a bit of a ‘difficult second album syndrome’ album in terms of overall merit, but it also feels like the artist’s attempt to push himself into new and more readily accessible markets.  There is enough of what made his debut such a standout here, and there is no doubting his vocal prowess, but for me, this is a bit of a step backward for Leon Bridges.

Br. lives in southern Ontario, grew up on The Beatles and The Journeymen, spent his adolescence immersed in grunge, and his adulthood in British alternative. His greatest joy is seeing his son dance and grow into his own appreciation of the indescribable joy of music...
RELATED ARTICLES
album reviewscolumbia recordsgood thing
10