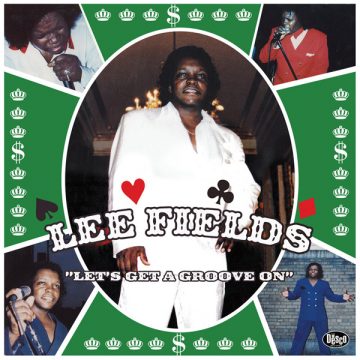 Lee Fields
Let’s Get A Groove On
Daptone

“How soul music used to be back in the day/When it was all rough, yeah, and nasty and genuine!”, sings Lee Fields on the bluesy, accurately if unimaginatively titled opening number, ‘Intro By Mr Fields’, ending with “I mean, come on, let’s get our groove on”. He and his band then proceed to do just that.

Back in the ‘60s,  Lee Fields was known as “Little JB”, due to both his physical and vocal resemblance to James Brown, “The Godfather Of Soul”. This album demonstrates just that. Originally released in 1998 by Desco and now reissued by that label’s successor, Daptone, it includes label founder Sharon Jones on backing vocals.

Try the title track with its grunts, squealing sax and chicken scratch funk guitar, or the slightly slower “Watch That Man” with its shouted call and response, African-American pride and social conscience. “Let A Man Do What He Wanna Do” leans more to the rawer end of the pre-disco sound of ‘70s soul, whilst Fields steps out for “All By Myself”, giving the talented band their own three and a half minutes in the limelight.

Fields is back, and back in complete James Brown mode, with “Put It On Me” grunts, groans, languid horns, instructions to “Play your horn” and “Hit it!” etc. The slow ‘Take It Or Leave It’ beautifully blends that ‘60s funk approach with Fields’ stint as a soul/ blues singer in the late ‘80s. “Steam Train” is frantic (a little too frantic for my taste, I do admit), ‘I’m A Millionaire’ is another socially conscious number, with a throbbing funk rhythm and bluesy lyrics, and then “Bad Bad Bad” closes out this fine release with a bluesy organ-led instrumental shuffle.

Both Fields and Daptone are rare contemporary champions of this kind of music. Be sure to check this one out.

Norman Darwen grew up in north-west England admiring Elvis’ gold lamé jacket, Lord Kitchener’s way with words, and his much older brother’s and sister’s dancing to The Rolling Stones’ ‘Little Red Rooster’ on the telly. He’d wind aforementioned brother up by reading the entire contents of an R’n’B magazine he used to have to collect from his local shop for him and then reciting back as much as he could remember. Some years later he’d wind up his own friends by telling them who these people were that Led Zeppelin etc were covering – Willie Dixon, Howling Wolf, Otis Rush etc. These days he still listens to the blues, but has added a taste for reggae, zouk, rap, folk and anything else that takes his fancy…
RELATED ARTICLES
album reviewalbum reviewsdaptone
8.0