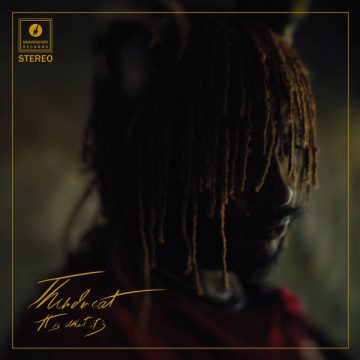 Thundercat
It Is What It Is
Brainfeeder Records

Thundercat is back with his first record since 2017’s critically acclaimed Drunk with, what is bound to be yet another, sure-fire, creative triumph, It Is What It Is. True to form, the bass virtuoso, with a tendency to write songs that incorporate elements of jazz, funk, soul, and hip hop, has delivered his fourth full-length album that, as always, is like nothing else you’ve heard and is distinctively that of the amazing Thundercat.

Opening with the ambient and sparse melody of the pop-driven “Lost In Space/Great Scott/22-26”, Thundercat dives headfirst into the jazz odyssey that is “Interstellar Love”. The prelude that is the first song, followed by the immediate contrast and blending of styles, is subtle and yet all you can hear. The pop vocal melodies continue to spill into “Interstellar Love” but rather than be backed by just a rhythmic synth, the whole band has come in, the pulse is swung, the groove is deep and changes regularly, and the saxophone solo is soulful. The contrast between these two arrangements, now stacked atop one another, could not be more juxtaposing, and yet, they grow together organically. This not only perfectly sets the tone for the rest of It Is What It Is, but also immediately establishes the truly unique and creative powerhouse that is Thundercat’s songwriting and his and his band’s musicality.

Such a contrast is ever more apparent on songs like “I Love Louis Cole” (featuring Louis Cole), “Miguel’s Happy Dance”, and “Overseas” (featuring Zack Fox), and “Fair Chance” (featuring Ty Dolla $ign and Lil B) among others, but It Is What It Is stretches beyond this now trademark collision of modern pop textures and rich jazz technique. “Black Qualls” (featuring Childish Gambino, Steve Lacy, and Steve Arrington), for example, is funky as all hell and grooves hard, just as “Funny Thing” is a synth-drenched ‘80s funk jam. Most notably, however, is likely the single, “Dragonball Durag” a mid-tempo funk track layered with jazz sophistication and seems to sit somewhere between Prince and Snarky Puppy, making one of the standout tracks on an incredibly strong album. It is also worth noting that the slow jam, “Unrequited Love” opens with a short, but phenomenal bass solo. In case you forgot, or take nothing else away from the musical nuance of It Is What It Is, Thundercat is a master of all things funky, a king of musical innovation, an absolute guru of the groove, and he will eat your bass for breakfast.

A passion for music has always been a part of Gerrod’s life. As a young boy, he was raised on a steady diet of the music from The Chili Peppers, Aerosmith, The Stones, Prince, and others from his mum. Raised in the GTA, Gerrod continued to foster his love for music by attending a wide range of concerts and learning the drums. His unapologetic passion for music has no bounds and has spread to a wide variety of styles, whether it be the 90’s rock that sound tracked his teenage years, the jazz he studied in university, or his newfound love for hip-hop. He recently received his bachelors in music and education from York University and is passionate about writing and reviewing good (and less than good) music. Gerrod is also the drummer and songwriter for a Toronto based rock & roll band, One In The Chamber.
RELATED ARTICLES
album reviewalbum reviewsbrainfeeder records
9.0