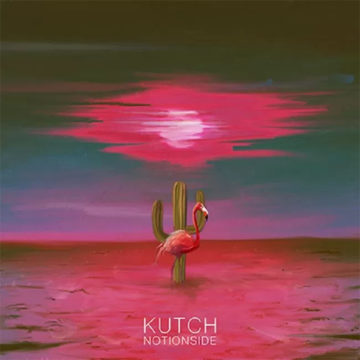 Kutch is made up of Colin Kutchyera and La+Ch (Coleman Hell’s Collective)   and Notionside is their debut album under the name Kutch. Both artists are no strangers to the music world but this collaboration was meant to be and long overdue. Both artists have their background in electronic and experimental music. Both have used computers, loops and sounds to create their own distinctive music. So Kutchyera and La+Ch seem like a perfect fit.

Both artists have similar roots and sensibilities when it comes to music, so this match seems very logical and quite a good idea. The album is a collection of songs, that for my money, reminded me of Owl City, when they were good. This is extremely good electronica pop. The duo create very strong melodies that take root and stay with you long after the album is over.

The album kicks off with the instantly accessible and catchy “Collecaible” and that groove remains throughout the album.  Interesting use of sped up vocals and voices, but in the end it is a wonderful electronic pop song that should be a hit.

The album follows suit. It is a well written and well played album, however it never lifts itself above this genre. I kept waiting for some experimentation, but it never really comes. For this album the duo play it safe. And as a result, as good as Notionside is, it never reaches its full potential. Given this is their debut effort, it does make one wonder what is in store for these two. The potential is there to produce an album that will be a benchmark in electronic pop, but this album is not it. When they do step out of the formula, as in “Not So Sure”, they produce incredible music, but they quickly resort to their format.

It does not make this a bad album, quite the opposite. It is a very enjoyable collection of songs, and it is a collection of songs, rather than an album. Each song could potentially be a single and receive airplay. Where they do excel is in the lyrics. Lyrically they do break away and have come up with thoughtful love songs, songs about relationships and mental health. The lyrics to “Cash In (Heavy Heart of  Gold)” are astounding and a brilliant look at how mental health is perceived in social and mass media.

As debuts go, this is a great album. Given both individuals backgrounds and work, greater things are to come.  This is a band that will grow and expand. I had hoped for more experimentation throughout the album, but perhaps that was not the focus here. This album is quality music, well played and well produced. The vocals are strong and it is a great album to listen to. So perhaps goals met.

Born and raised in Whitby, Aaron discovered music through his love of The Beatles. This led to a career in radio, writing for various publications, and ultimately a radio show about The Beatles (Beatles Universe), which ran for over four years. When not immersed in music, Aaron enjoys spending time with the loves of his life -- his wife Andrea, and daughters Emily and Linda (all of whom have an intense love of music too).
RELATED ARTICLES
album reviewscoleman hellcollectable
9.0