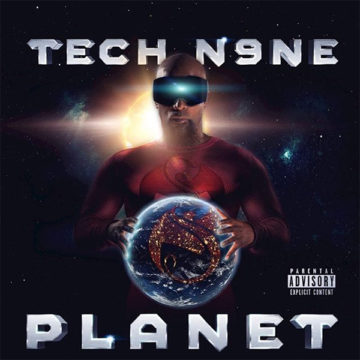 Tech N9ne has almost become a household name despite being an independent rapper. His hard work has paid off because he is the most decorated independent rapper of all time. He is most known for his heavy beats and fast lyrical work. With his 20th studio album, Planet, Tech N9ne continues the trend.

Planet was written by Tech N9ne because he said that he was fed up with all the evil of this world and decided that he wanted to create his own planet. His planet is one that I will be revisiting quite a bit from now on. Tech N9ne does something special with this album. He creates heavy crossover appeal to multiple genres. For anyone that loves heavy metal, the heavy instrumentation on songs like “Habanero” and “Kick It With Myself” will keep them engaged and excited about what else there is to come. “No Reason (The Mosh Pit Song)” featuring Y2 and Machine Gun Kelley will have enough pop appeal to get featured on radio stations, that is, if Tech N9ne would allow that. Which he won’t. The whole album is full of incredible lyricist work by Tech N9ne. The speed he spits on “Fresh Out!” is incredible. Even when saying the words at a breakneck speed, somehow Tech N9ne manages to not mumble a single word. “How I’m Feelin’” has the guest artist Snow Tha Product show that women belong in the rap game as well. She is able to keep up with the speed of Tech N9ne which is a real feat in itself.

This album should definitely get some play by everyone. Tech N9ne has created something special here that can appeal to just about anyone. If nothing else, the ability to sound so aggressive and deliver a message of peace is something to be heard.

The Spill Magazine is a Toronto-based online publication dedicated to covering the independent music scene with a strong focus on our thriving hometown talent. Our writers bring you up-to-date news, in-depth features on musicians and reviews for the latest CD releases. We also travel to the front lines for all local festivals including Canadian Music Week and North by Northeast.Don’t forget to check out our Facebook and Twitter pages for all daily Spill updates.
RELATED ARTICLES
album reviewsstrange musictech n9ne
8.0