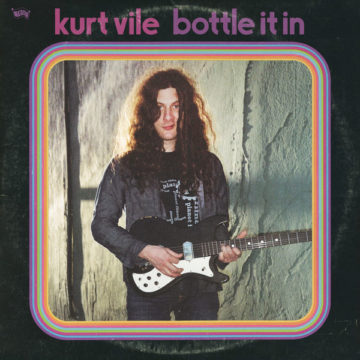 Bottle It In, Kurt Vile’s first solo LP since his most successful record to date, b’lieve i’m goin down, brings a “newish” side to of his repertoire. Recorded over a span of three years, we see the 38-year-old Philadelphia native bring elements of lush jangliness to his customary laid-back psychedelic-folk.

This time around, Vile’s performances are more drawn out and groove-based, imagine a cross between Neil Young’s Harvest and My Bloody Valentine’s Loveless. This is essentially what to expect here with Vile’s traditional folk picking overdubbed with electric intervals fed through a reverse delay pedal. The dense guitar layers are dreamlike and give the album more space, reminiscent of his 2013 release, Wakin on a Pretty Daze.

On Bottle It In, we see indie-rock veteran bring back the longer jam format on several tracks, something that was missed on his last LP. While he pulls it off in strides on “Bassackwards”, the second single from the album clocking in at over nine minutes, the other songs in this time range are nowhere near as enticing. On Wakin on a Pretty Daze, Vile’s song selection was slightly more versatile whereas here they are frankly not as enticing. The longer jam tracks like “Skinny Mini” and the title track just drag on for too long.

The medium-length tunes, on the other hand, are where this album really cooks. “Loading Zone” and the Fleetwood Mac-like “One Trick Ponies” bring crispness to the record. With the latter track, it seems as though he is poking fun at himself, especially since this record sees him returning to his “older” sound. That being said, tracks like “Hysteria” and “Rollin With the Flow” don’t fail in keeping the listener hooked.

As a child growing up in the suburbs, Ryan found music as a way to soothe his boredom. After first hearing AC/DC at the age of 10, he was hooked on music. Tracing its roots to the ‘50s, he became obsessed with Elvis, Buddy Holly and Chuck Berry. Somehow that led to grunge, then psych-rock, then jazz, etc. The list goes on and on and his collection of vinyl records continues to grow.
RELATED ARTICLES
album reviewalbum reviewskurt vile
8.0