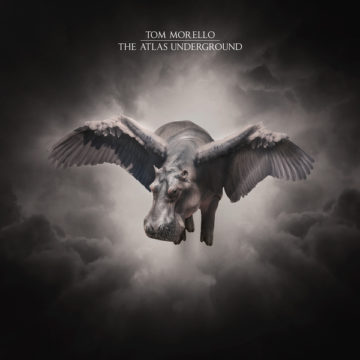 For his first solo album since 2011’s World Wide Rebel Songs – under the alias of The Nightwatchman – Tom Morello has returned with The Atlas Underground, a collection of twelve tracks featuring a wide variety of collaborations, including established icons such as Gary Clark Jr., Killer Mike, Big Boi, Marcus Mumford, and Wu-Tang’s RZA and GZA, along with up and coming artists including Vic Mensa and Leikeli47. As the first album under his own name, Morello seeks to further revolutionize guitar and rock music – as his has done throughout his career with Rage Against The Machine, Audioslave, and most recently, Prophets Of Rage – this time; however, he looks to integrate his signature riffs and explosive social and lyrical content with that of modern electronic music.

The instrumental “Battle Sirens” featuring Knife Party serves as a strong introduction to not only The Atlas Underground, but also Morello’s musical vision as he opens the album with a track that seamlessly blends hard rock – in tone of Black Sabbath and Randy Rhoads – with EDM drops and digital effects to simulate a vocal melody and complement Morello’s guitar. The album truly picks up on the following track, “Rabbits Revenge”, a hard-hitting track driven by crunching distorted chords and Outkast’s Big Boi and Run the Jewels’ Killer Mike’s bold and ruthless lyrics that tackle police brutality and violence directed at the African American community, even paying respect to Trayvon Martin and Michael Brown, all in a slick manner that pulls no punches.

Stepping away from hip-hop, “Every Step That I Take”, written in memory of Chris Cornell with Matt Shultz of Cage The Elephant, features Portugal. The Man for a pop banger that fits in with his and Morello’s alternative approach to popular music and structure. Perhaps the most emotionally driven track goes to Morello’s collaboration with Marcus Mumford on “Find Another Way” as Mumford layers his vocals in beautifully haunting harmony over electronic beats with Morello laying out a soulful solo reminiscent of Audioslave’s “Like a Stone”.

While there are other pop tracks on the album, I find The Atlas Underground soars best when Morello is working with a rapper. The Vic Mensa led track see’s Morello indulge in one of his funkiest riffs in years while K.Flay’s rapping and singing on “Lucky One” again takes Morello in a direction that feels nostalgic for Audioslave, featuring a variety of killer guitar parts underneath K.Flay’s glossy vocals and clever lyrics. Furthermore, “Roadrunner”, featuring Leikeli47 as she raps with a level of grit, style, and attitude that would put Cardi B on notice, and the Wu-Tang flex of RZA and GZA on the album closer “Lead Poisoning” capture a level of raw intensity that Morello built his career on.

A week ago, Morello was in Toronto, hosting an album listening party for a sold out audience of what could not have been more than three hundred people. As I sat in the Harbourfront Centre Theater listening to The Atlas Underground a week early, I reflected how this will be one of those albums the long-time fans either love or hate, something Morello even joked about. As an exercise of one’s musical ability and ambition – to work in a new style while bringing one’s own flair with an ever changing cast of artists – The Atlas Underground is a raging success as it catches Morello at yet another creative peak (has he yet to come down from his first peak in 1992?) that celebrates experimentation and innovation. While I could have done with a bit more guitar, especially on the Gary Clark Jr. featured “Where It’s At Ain’t What It Is” where I would have killed to hear the two guitar legends trade solos, The Atlas Underground is a killer record that is as socially profound as it is musically innovative.