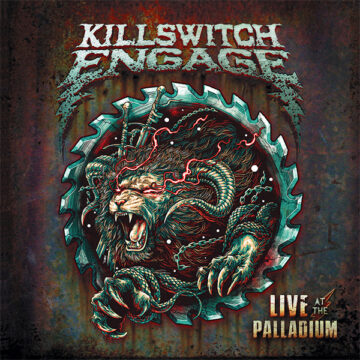 Killswitch Engage has stood the test of time by being one of the most accomplished bands in the metal scene today. For a band that has many record-breaking achievements to their name, releasing a live recorded album without an audience was not only a risk but one that showed dedication to their fans. While the band is no stranger to capturing the magic of live events via an album, this unique experience includes performances of 2019’s Atonement and their 2000 self-titled full-release in their career. Taken from last summer’s massive live stream event, Killswitch Engage has combined these grand performances for the first time digitally, on 2 LP and 2 CD/BR, releasing the it under Killswitch Engage: Live At The Palladium.

The album starts with a colossal crusher, “Unleashed.” A live experience that shows Jesse Leach’s vocals in top form and the imposing aggressive guitar energies of Adam Dutkiewicz and Joel Stroetzel, it punches its way through to many other satisfying experiences that will soon follow.

Another melodic occasion that stands out on Killswitch Engage: Live At The Palladium is “Us Against The World.” Intertwining with percussive finesse and a towering guitar presence, it’s a track experience not to be missed on the album.

Other performances such as “The Crownless King,” “I Am Broken Too,” and “As Sure As The Sun Will Rise” bring a gorgeous boost of energy to this record. At this point of the album, the band has shown not only that their talent precedes them in experience but also that they have not lost a step when it comes to showing off their unrelenting energy and passion for what they do live for their fans.

“Ravenous” and “I Can’t Be The Only One” are other favorites on the record that show why the band deserves a seat at the table for top-tier bands in the metal scene. Full of caustic and melodic guitar cadence that plays on pulsating atmospheric soundscapes, here is where we hear some of the most powerful performances on Killswitch Engage: Live At The Palladium .

This is not the standard live record for the renowned metal band. Killswitch Engage, even without the large audience backing their larger-than-life presence, have never sounded brighter and more impressive. With added performances from their earlier works, it shows that Killswitch Engage wanted to do something special for their fans and it shows with their dedication in every performance.