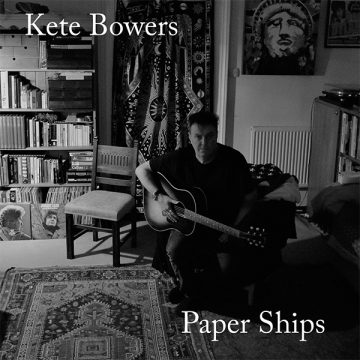 Paper Ships is a fantastic album from an artist that deserves a great deal of attention. Kete Bowers has written and released an album of folk/Americana/rock songs that will not only resonate but impact your very soul. This is a stunning album, from an artist who has been releasing several great singles over the past few years. But, he really delivers the goods on a full album. Paper Ships has a great sleeve that tells you a lot about what you are about to hear. You put a Johnny Cash and Bob Dylan beside the artist, and you have an idea of what you are in for.

Bowers does tip his hat towards more traditional folk music but the use of electric guitar allows him to slip easily into the realm of Townes Van Zandt or Sturgell Simpson. He is not copying but in terms of sound and lyrics, this is the direction he finds himself. He then dips into Nick Cave country (especially the song “A Place By The River”, which I am sure Cave would love to have written).

Timmins production is flawless, and in the end, Paper Ships is an album full of sparse, atmospheric folk/country/rock music combined with wonderful stories. Top it off with Bowers’ fantastic vocals and his ability to break your heart with a single word and you have a near perfect album. What more could you want?

Born and raised in Whitby, Aaron discovered music through his love of The Beatles. This led to a career in radio, writing for various publications, and ultimately a radio show about The Beatles (Beatles Universe), which ran for over four years. When not immersed in music, Aaron enjoys spending time with the loves of his life -- his wife Andrea, and daughters Emily and Linda (all of whom have an intense love of music too).
RELATED ARTICLES
album reviewalbum reviewscurrent records
9.0