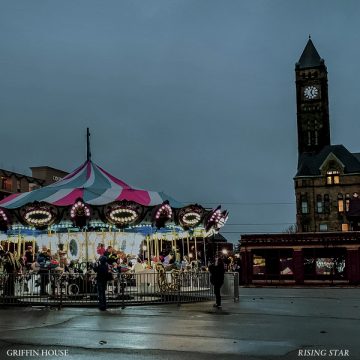 After 13 studio albums, Nashville-by-way-of-Ohio singer-songwriter Griffin House is more “old hat” than “rising star” yet his latest album is titled just that. Paradoxical? Maybe—but Rising Star is shot through with forward-looking optimism, suggesting House is a man pursuing individuation, rising through an outgrown eggshell to embrace a new life.

The storytelling prowess in the title track and subsequent “15 Minutes of Fame” is entrancing. In “Rising Star,” through witty phrasing and a rogues’ gallery of country clichés, House tells the hilarious story of Joe Everyboy coming to Nashville with his six-string and a dream. House achieves tummy-seizing guffaws when Joe meets “Keith Urban in a button-up place/Tried to talk to him, got punched in the face.”

Rising Star has its moments, but it’s mostly comprised of blasé, unremarkable ruminations on life at almost-40 that wouldn’t sound out of place at a weekday open mic. Not offensive, not discordant, not inaccurate…not anything, really.

G. Roe Upshaw is a servant of mighty Music in this life, all previous lives, and on into the next. He barters his sumptuous time for tinkling coins doing this and that for him, her, and them.
RELATED ARTICLES
album reviewalbum reviews
7.0