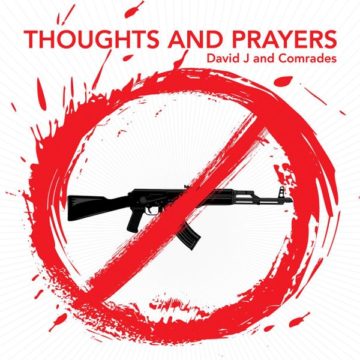 You can tell David J is pissed. You can see it from his announcement video concerning his new single which is to be released this coming Record Store Day (April 13) with backing band Comrades on Schoolkids Records. More than that, you hear it in the lyrics and music for the A-side of this seven-inch. The song was written in reaction to the school shooting in Parkland, Florida and he said it initially just poured out of him. He recorded it right away and put it out on the internet to great acclaim. A friend of his, Rick Johnson, offered to put up the money to record a full band version of it and another track, then manufacture the whole set.

“Thoughts and Prayers” begins with the lyrics, “In the wake of another killing, they’re sending thoughts and prayers, while receiving blood money from the NRA, Undeclared”. Well if that isn’t an indication of the visceral verses to come. It’s a terrific rant with no chorus so don’t expect a hook. There isn’t meant to be one. Just the ‘thoughts’ of the artist and he delivers.

The B-side is a very faithful cover version of Emily Jane White’s song, “Hole in the Middle”. It was evidently written in response to the Bush administration but David stated in his video about the single that it’s just as relevant now. See what you think on Record Store Day. The single is limited to 500 copies only.

Michael Mitchell's love of music started at an early age and slowly became an addiction that courses through his veins to this very day. It is guaranteed that if you are in his proximity, he will try to get you to travel to the nearest record store and make you buy beyond your means. His wife and two children acknowledge his problem and continue to encourage him into rehab. He currently writes for Torched, Stereo Embers, God is in the TV, ReGen and Spill magazines.
RELATED ARTICLES
album reviewalbum reviewsbauhaus
9.0