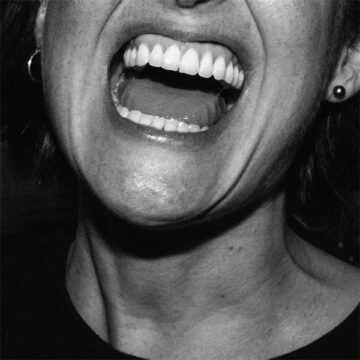 The polarity between lead vocalists Leah Fay Goldstein and Peter Dreimanis remains the core of July Talk’s appeal. Even with an expanded lineup, this remains true on their fourth album, Remember Never Before. As Canada’s leading alternative rock band continues to push forward into fresh sonic territory, the push and pull between Goldstein and Dreimanis is refined, making for a record that is none other than that of July Talk.

Remember Never Before opens with a cinematic urgency with enough intensity that it could only further develop a sense of tension and uncertainty in an Oscar-worthy film. Falling somewhere between Arctic Monkeys and the Menahan Street Band, “After This” is a prime example of July Talk’s power as songwriters and their ability to capture a genuine sense of emotion through both their writing and their raw performance. You’ll feel it most when Goldstein’s vocals are pushing the top of her range in the bridge overtop a rhythmic breakdown and roaring, distorted guitars. The following song, “Certain Father”, feels like an electronically psychedelic extension of Bowie’s early ‘70s output, while “Human Side” rounds out the opening three songs of the record with a true to form July Talk banger that sees the band play with dynamics, dissonance, and tension to deliver a unique track.

From this point, Remember Never Before struggles to maintain the momentum of the opening three tracks. By no means is this a slight on the remaining eight tracks, rather, the opening trio is just that strong. Despite this, there are more moments of greatness that July Talk has to offer. The funk-inspired verses of “Silent Type” carry a distinct swagger while the tribal rhythms and weaving melodies of “Repeat” make for a stunning delivery. Bringing the album to a close is the Dreimanis-led piano ballad “Raw”, the emotional climax of the record, followed by the hypnotic grooves of “I Am Water”, a thrilling conclusion that builds in momentum through evolving progressions and the band’s signature chaotic sense of counterpoint.

Remember Never Before is perhaps July Talk’s most refined collection of music yet. On their fourth record, the now expanded band is approaching their songwriting in a nearly compositional manner, resulting in fuller arrangements and cinematic tones organically clashing with alternative rock riffs and beats. Remember Never Before marks a step forward for July Talk, one which, for the better, they may never return from.

A passion for music has always been a part of Gerrod’s life. As a young boy, he was raised on a steady diet of the music from The Chili Peppers, Aerosmith, The Stones, Prince, and others from his mum. Raised in the GTA, Gerrod continued to foster his love for music by attending a wide range of concerts and learning the drums. His unapologetic passion for music has no bounds and has spread to a wide variety of styles, whether it be the 90’s rock that sound tracked his teenage years, the jazz he studied in university, or his newfound love for hip-hop. He recently received his bachelors in music and education from York University and is passionate about writing and reviewing good (and less than good) music. Gerrod is also the drummer and songwriter for a Toronto based rock & roll band, One In The Chamber.
RELATED ARTICLES
album reviewalbum reviewsjuly talk
8.0