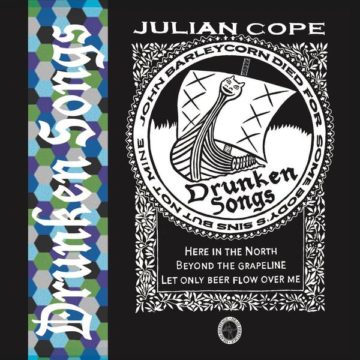 Author, activist, historian, musician, writer, father, LSD expert, antiquarian, and more: that is Julian Cope. He has released over 40 solo albums since the demise of Teardrop Explodes, an English post-punk/neo-psychedelic band formed in Liverpool in 1978. This album, Drunken Songs, is his first album of all new material since 2013’s Revolutionary Suicide (he was part of the group Vesuvio who released a self-titled album in 2014 as well). As usual for Mr. Cope, he does the unexpected (did anyone expect him write a book on Neolithic culture?). He has recorded an album of six drinking songs and in doing so, has produced one of his best albums in his career.

Julian Cope has experimented with many styles, sounds, and genres over the past 30 years. He has produced fine works, while others are curios that sit on the record shelf that get listened to every so often. But in truth, he abandoned the basic song structure a long time ago. Here, he goes back to writing and recording songs and it is a welcome return.

Armed with his Mellotron 400 and very little help from anyone, the Archrude proceeds to sing about the virtues of being drunk. Stepping back from his LSD experiences (read his autobiography), he is revisiting old habits and old towns. He sings of Liverpool and traces his Irish ancestry by, at times, using alcohol as a metaphor. By exploring his past, he has produced a very English album. This album would not have been out of place when he first went solo (there are shades of Droolian and Fried, and, as a tip, if you don’t own those two albums, drop everything and find them).

The songs themselves are enthusiastic, well-sung drinking songs. The last track, “On The Road to Tralee” is an 18-minute ‘magical mystery tour’ of Ireland through an alcoholic gaze. Words would fail to describe it; it really must be heard to understand. Suffice it to say, the 18 minutes fly by and one is transported in space, time, and geography.

This is one fine album and a strong contender for album of the year.