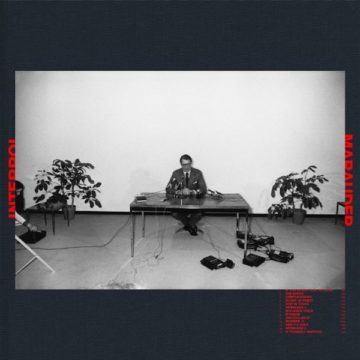 Interpol formed in 1997 and released their first studio album in 2002 (Turn On The Bright Lights). Since then there have been member changes and four more albums. Marauder is their sixth album, and their first since 2014’s El Pinter. Paul Banks (vocals, guitar) and Daniel Kessler (lead guitar, backing vocals) are the two remaining original members, with original drummer Greg Drudy leaving the band in 2000.

Dave Fridmann (Mercury Rev) produced the album, and he brings his own sound to the mix. This is a good thing. Given his long line of production credits, as well as his own musicianship, he has his own distinct approach to Interpol, and in some ways this allows the band to experiment and expand in many directions, not that Interpol has ever needed permission to do that. But here, it seems that they are incorporating new sounds and techniques in a more planned fashion.

Listen to “Number 10” and the use of layering guitars in the intro, morphing into a very different sound for the body of the song. The band is clearly continuing to grow but again, it sounds more of  organized chaos this time around.

Their obsession for the 1980s continues on this album, which again is fine with me. I am not saying for one minute that they are copying anything from the 1980s, but the influence is certainly felt throughout Maurauder. Listen to “The Rover”, which seems to be channeling the spirit of Big Country, though I am not so sure it isn’t, in some ways, a tribute to Stuart Adamson.

I am going to confess, Interpol’s lyrics have seldom been very clear cut to me. And Marauder is no exception. To me, they have always had the ability to paint images with their words, but the intended meaning was somewhat of a mystery. Yet, with the music and the lyrics combination it works perfectly. Listen to “Number 10”, which is reportedly about an office romance. Yet without reading an explanation, it is not that clear. “Won’t seek replacements, my ballerina/There’s many faces in my gallery”. Of course this is just a small sample but it is a good example of the fun wordplay.

Interpol has come through with a beautiful album that requires and deserves multiple listening sessions. The more you listen, the more you will get from the album. Marauder is an intelligent, well thought-out and well-produced album. Interpol have clearly put a great deal of work and energy into this album, and the payoff is a stunning album.

Born and raised in Whitby, Aaron discovered music through his love of The Beatles. This led to a career in radio, writing for various publications, and ultimately a radio show about The Beatles (Beatles Universe), which ran for over four years. When not immersed in music, Aaron enjoys spending time with the loves of his life -- his wife Andrea, and daughters Emily and Linda (all of whom have an intense love of music too).
RELATED ARTICLES
album reviewalbum reviewsinterpol
8.0