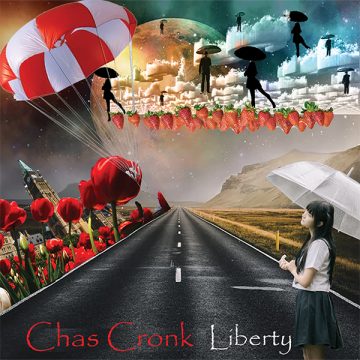 Take Chas Cronk: For decades, Chas Cronk has been in a supporting bass-playing role to iconic acts like Strawbs and Rick Wakeman. He has now stepped into the spotlight with Liberty, a collection of positive, empowering tracks. . “Liberty,” his first release from the album, amassed thousands of hits and captured the attention of Renaissance Records, who offered Chas a record deal.

“I didn’t want to just use recordings I had lying around,” says Chas, “so I set out to create a collection of new material, songs with a positive message that reflect the strength we need to get through this bleak time.” And that he did, inspired by everything from headlines to the stunning artwork Renaissance Records created for the album. While Strawbs fans will recognize the superb guitar work of Dave Lambert on “A Splash of Blue” and Dave Bainbridge on “Slipping Downstream,” the remaining music was created by Chas, his guitars and digital workstations. That’s what I call a solo album!

From the dreamy, hypnotic title song, to the Bowie-esque “System Overload,” the pop-inspired “Away” and the rocking “Into the Light,” Liberty astonishes…and makes us wonder what else the seasoned bass player has been hiding all these years.

The Spill Magazine is a Toronto-based online publication dedicated to covering the independent music scene with a strong focus on our thriving hometown talent. Our writers bring you up-to-date news, in-depth features on musicians and reviews for the latest CD releases. We also travel to the front lines for all local festivals including Canadian Music Week and North by Northeast. Don’t forget to check out our Facebook and Twitter pages for all daily Spill updates.
RELATED ARTICLES
album reviewalbum reviewsliberty
8.0