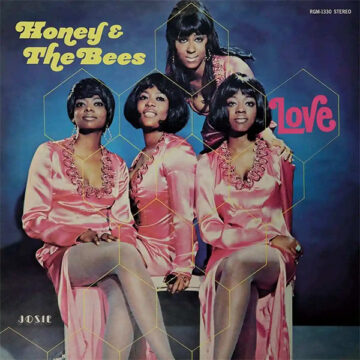 In 1970, when Arctic Records owner Jimmy Bishop met and heard Jean Davis, Gwen Oliver, and Cassandra Wooten, they were known as The Yum Yums. He added Nadine Felder as their new lead vocalist and The Yum Yums became Honey & The Bees. He signed them to his label. Before Bishop could even record the band, the label folded, the Josie label came to the rescue, and the album Love was recorded and released. Bishop was still on board as producer and he brought together some fine rhythm and blues musicians and writers, such as drummer Earl Young, guitarists Wilbert Hart and Norman Harris, and pianist Leon Huff. Add arranger Bobby Martin and the result is an incredible ‘Philly Soul’ sounding album.

But, in 1970, the album flopped. It became near impossible to find and has become a collector’s item. The album may not have sold, but it did have an impact. Its reputation grew and many fans of Philly Soul became enamoured with the album. By 2022, fans became extremely desperate for a copy of this album. Real Gone Music seized the opportunity to fill a hole in the market and have reissued this now classic and almost mythical album. Its status as a classic album is well deserved. This is an album from beginning to end full of incredibly well-arranged and well-performed songs.

The first song on the album opens with drums, harp, and melodic guitar, bringing the listener into this world. “We Got To Stay Together” is written as a simple plea from a girlfriend to her boyfriend, but it is a lot more. The song, which is an extremely well-arranged song by Norman Harris and bassist Ronnie Baker is the best way to open the album. But it is the vocals that instantly win the listener over. The initial harmony of the singers give way to Felder who sings her heart out. This is followed by the more upbeat and horn blasting “Make Love To Me”.

The album ends with the short epic “Love Is The Key”. It is a strong anti-war song, but also incorporates personal politics. It is, again, beautifully arranged and the use of the vocals blending with a minimal horn arrangement is nothing short of spectacular. The album is bookended with such incredible songs. In between, there is more of the same. There is nothing wrong with any of the songs, but there are moments when Honey & The Bees lose the plot and sound a little too close to The Supremes. When Honey & The Bees are at their best, they are at their best because they are carving out their own style.

The band would record a  number of singles following Love, but by 1972, it was all over. The band had never had any chart success and although they produced wonderful music, they were not catching on with the record-buying public. Gwen Oliver and Cassandra Wooten would go on to join The Ritchie Family, where they had a number of hits, but Honey & The Bees were gone. Thankfully, we have the album to enjoy, and we are fortunate to have Love back in circulation. You can hear what the fuss is all about.

Born and raised in Whitby, Aaron discovered music through his love of The Beatles. This led to a career in radio, writing for various publications, and ultimately a radio show about The Beatles (Beatles Universe), which ran for over four years. When not immersed in music, Aaron enjoys spending time with the loves of his life -- his wife Andrea, and daughters Emily and Linda (all of whom have an intense love of music too).
RELATED ARTICLES
album reviewalbum reviewslove
8.0