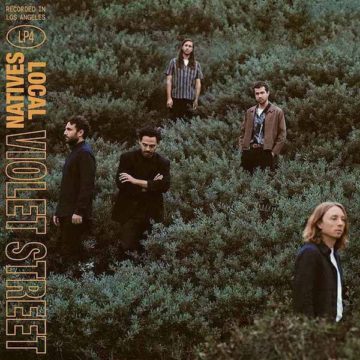 Local Natives have evolved throughout each album. Their debut LP, Gorilla Manor, featured the rough-around-the-edges energy of a young band letting loose, while Hummingbird introduced a more subdued sound that incorporated electronic layers. However, the arena-rock of Sunlit Youth lost some of the creative essence that made Local Natives such an interesting musical act.

Violet Street sees Local Natives finally reaching the next stage of evolution they have been looking for. They wisely have reinstated their spectacular three-part harmonies at the core of their music and they have never sounded as musically creative as they do here. Considering it is their fourth album, their boldness to explore and to push their musical boundaries is admirable and reminiscent of a newer band. The whole album is blanketed in cascading harmonies and rich atmosphere, from the overlapping layers of opening track ‘Vogue’ and the distorted reverb of ‘Munich II’ to the psychedelic musical soup of ‘Someday Now’ and the intricate soundscape of ‘Tap Dancer’.

However, the album is not perfect; in their attempt to balance contemporary and experimental songwriting, they occasionally err in both directions. The first half of ‘When Am I Gonna Lose You’ sounds too reminiscent of Maroon 5, taking the creative drum patterns that characterize much of their music and replacing it with a basic dance beat. On the other hand, Local Natives also veer a little too far into the experimental territory. The shifting dynamics of ‘Megaton Mile’ feel messy, while the transition from the hard-hitting brass synth of ‘Shy’ to a live drum break does not flow well. Yet these are the outliers on what is primarily a solid batch of songs.

Overall, Local Natives have crafted a bold and experimental album, as they continue to create innovative songs and push themselves as artists. This is a strong release from a very talented group of musicians.

Kieran Davey is a freelance writer and music enthusiast from Vancouver, Canada. He particularly enjoys alternative rock, groovy hip-hop, and basically any music from the 60's. Aside from reviewing music, he also loves playing guitar and spending time in nature.
RELATED ARTICLES
album reviewalbum reviewscafé amarillo
8.0