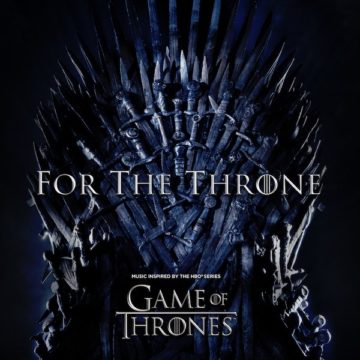 HBO’s Game of Thrones fans will be excited to hear the new music released on the album, For the Throne (Music Inspired by the HBO Series Game of Thrones). This album offers 14 tracks that feature a diverse range of artists and multiple musical genres. Country singer Marin Morris opens the album with a haunting sounding song, “Kingdom of One” and is followed by a mix of alternative, pop, and hip-hop Game of Throne themed songs. Many well-known artists were inspired to offer their talents and it resulted in some amazing tracks. The Lumineers’ “Nightshade,” Ellie Goulding’s “Hollow Crown”, and Rosalía’s “Me Traiconaste”, are tracks that you won’t want to miss whether you are a Game of Thrones fan or not. If you are a fan of HBO’s award winning show then you will hear, and understand, the references throughout the album. In the last song, “Pray (High Valyrian)” by Matt Bellamy you hear the sound of Daenerys repeating a prayer again and again. Other songs are not as literal as having High Valyrian in them but their lyrics and rap bars are all about The Game of Thrones characters you love…or love to hate. You can get this album digitally or pick it up on CD or vinyl format.

The Spill Magazine is a Toronto-based online publication dedicated to covering the independent music scene with a strong focus on our thriving hometown talent. Our writers bring you up-to-date news, in-depth features on musicians and reviews for the latest CD releases. We also travel to the front lines for all local festivals including Canadian Music Week and North by Northeast. Don’t forget to check out our Facebook and Twitter pages for all daily Spill updates.
RELATED ARTICLES
album reviewalbum reviewsgame of thrones
8.0