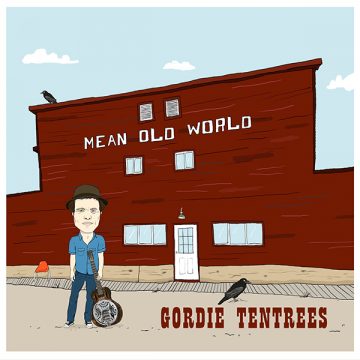 Mean Old World is Yukon-based Gordie Tentrees seventh album, and is his first since 2018’s GRIT. With a title like Mean Old World, one would think this is a depressing folk album.  Don’t let the title fool you, this is not the case. Rather it is a very personal album chock full of incredible folk/country-based tunes that show the strength of the human spirit. This may sound like a tall order, but a singer/songwriter as talented as Tentrees has no problem achieving this goal.

Tentrees keeps the music stripped down and bare. Working with Bob Hamilton (The Undertakin’ Daddies), and Jaxon Haldane (D-Rangers), the songs are arranged in such a way that music and vocals complement each other perfectly. The arrangements bring out the core beauty of each song. Hamilton, who produced the album, deserves a great deal of credit here. He has allowed space for Tentrees to sing these personal and important songs. His vocals are strong and this is essential. The lyrics are extremely important and here the listener does not have to fight with the music. Rather, Tentrees provides the perfect vocals, while the music has your foot tapping.

Tentrees addresses some very heavy subjects. “Every Child”, for example, is a beautiful and tender song which is extremely heartbreaking, and although there is no clear resolution, there is resilience. The song contains vocals from members of Dakhká KhwáanDancers, the National Award-winning Inland Tlingit dance group based out of Whitehorse, of which his daughter is a member of the junior group. It is moving and comes from a very personal place.

“Mean Old World” is another example of resilience in the face of heartbreak.  “Well you got so much going against you/ The colour of your skin/Residential school”, sings Tentrees, but this is followed with “Put on your shoes/You’re born to bloom/Don’t ever give in”. A wonderful sentiment and I am selling the song short as lyrically, Tentrees shows the power of love and human support. Musically, it is one catchy tune as well.

That can be said for the entire album. It is clearly very personal for Tentrees and his family’s experiences dealing with the foster system, and as a non-Indigenous parent to an Indigenous child.  This is not a political manifesto, rather a person relating his story and his observances. This makes for an incredible listening experience.

There is a lot to this album, both musically and lyrically. Tentrees has delivered a fantastic album that will require multiple spins, but one will be more than happy to do just that. Mean Old World is one of those rare albums where the artist opens up, uses their personal experiences and produces an album that can reach the listener on many levels.