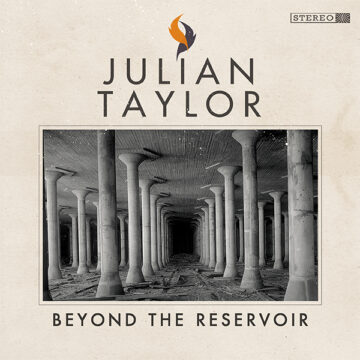 Julian Taylor
Beyond The Reservoir
Independent

Following the release of his critically acclaimed 2020 album, The Ridge, Toronto’s Julian Taylor has returned with his latest record, Beyond The Reservoir. Produced alongside his long-time collaborator, Saam Hashemi (Snoop Dogg, Ludacris, The Kooks) and recorded at Hashemi’s place, Canterbury Music Company, and Blue Rodeo’s The Woodshed, Taylor has delivered, yet again, a vulnerable and intimate collection of his creative musings that continue to demonstrate his authenticity and creativity as an artist.

Remaining within the style of The Ridge, Taylor opens Beyond The Reservoir with the warm strumming of an acoustic guitar – accented by a gentle lap steel – on “Moonlight”. Taylor’s vocals, soft, yet with the slightest edge to it, engage the listener with his narrative and lush harmonies as the song grows, slowly and organically, across it’s near seven-min run.  It is a challenge to make a lengthy song justify such a run time, however, each second of “Moonlight” feels necessary. That is the brilliance at the core of Beyond The Reservoir; Taylor’s ability to take simple concepts and nurture them with such conviction demonstrates a masterful grasp on the art of songwriting.

Beyond The Reservoir is a folk and roots rock treasure trove of nine tracks – along with acoustic blues of the bonus track, “100 Proof” – full of stunning musical highlights. From the stark and gripping tale of “Murder 13” to the soulful musings of “Opening The Sky”, Taylor’s delivery is remarkable. Most notable on the record is “Stolen Lands”, the modern, decolonized take on Woodie Guthrie’s “This Land Is Your Land”. The dark tone of the track, led by Taylor’s gravelly vocals and accented by a flurry of strings and percussion, is a harrowing look at intergenerational trauma that makes for a jaw dropping performance.

With the delivery of Bruce Springsteen and Neil Young, Beyond The Reservoir raises the benchmark and expectations once again for Taylor. His latest record manages to exceed the standards set on The Ridge while further establishing himself among Canada’s most premier songwriters. Ultimately, Taylor remains unparalleled.

A passion for music has always been a part of Gerrod’s life. As a young boy, he was raised on a steady diet of the music from The Chili Peppers, Aerosmith, The Stones, Prince, and others from his mum. Raised in the GTA, Gerrod continued to foster his love for music by attending a wide range of concerts and learning the drums. His unapologetic passion for music has no bounds and has spread to a wide variety of styles, whether it be the 90’s rock that sound tracked his teenage years, the jazz he studied in university, or his newfound love for hip-hop. He recently received his bachelors in music and education from York University and is passionate about writing and reviewing good (and less than good) music. Gerrod is also the drummer and songwriter for a Toronto based rock & roll band, One In The Chamber.
RELATED ARTICLES
album reviewalbum reviewsjulian taylor
8.0