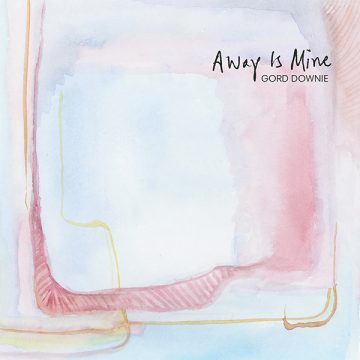 Gord Downie
Away Is Mine
Arts & Crafts

Traditionally, The Tragically Hip fans, over the past thirty-plus years, have become accustomed to hearing new material from the band every few years, including solo and side projects. In the spirit of once again seeing an old friend, this blanket of comfort brings familiarity and a sense of warmth to those who yearn for more and wait with bated breath. This ritual ended with Gord Downie’s 2017 farewell album, Introduce Yerself.

This custom, which appeared to surely be over, was once again returned to its glory earlier in 2020 with The Tragically Hip’s bass master Gord Sinclair’s solid first solo album Taxi Dancers. Now, this trend of a return to normalcy has further been resurrected with the release of Gord Downie’s surprise solo, 20-song double album, Away Is Mine.

Recorded mere months before his death, Downie and longtime friend Josh Finlayson (Skydiggers) hit the studio at The Tragically Hip’s Bathhouse, to record this highly secretive release. The result is somewhat of a departure from the sombre Introduce Yerself. Downie sounds at peace in his final months, rolling with the punches as his spirit soars, while he contemplates and questions his life and choices made.

“This won’t be his last release, but these are the final ten songs Gord sang into a mic, that’s pretty special to us” shares brother Patrick Downie.

The second half of the album contains songs that are stripped-down, raw, acoustic numbers, performed with Finlayson. They are minimalist and honest, with Downie’s voice doing most of the work. While sounding only somewhat and understandably at times, fatigued, it’s a miracle that Downie produced such beauty at this stage of his life.

Although this album could emote gloom, Downie’s spirits sound high, his voice employing hope while reflecting on his life and his final days. Considering all factors, there is a lot to absorb here, as well as a plethora of songs to enjoy. The album is consistent and best listened to from beginning to end for full effect, with each song bleeding into the next.

From the standout tenth and twentieth songs, both “Untitled”, which could be simply titled “Goodbye”;

“No one says “Goodbye” anymore/
for fear that’ll be ‘goodbye’/
‘Goodbye’ Not just the end/
“Goodbye” with no description.”

Away Is Mine serves as a reminder that Downie, our dear friend gone far too soon, gave everything he could musically, before the inevitability of his death. Although Downie has been gone physically for three years now, Away Is Mine helps to keep his flame burning. It gives credence to one imagining Gord Downie, the poet, “The Man Who Walks Among The Stars”, as he continues to “write about words” in a far better place.

John Graham is a Vancouver-area resident who typically spends most days admiring music of all genres. When not listening to music, John is usually at a live show, somewhere in the bowels of Vancouver.
RELATED ARTICLES
album reviewalbum reviewsaway is mine
8.0