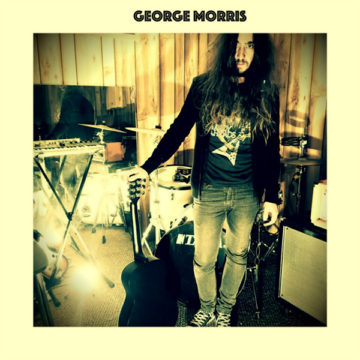 Wow, what a year so far for music. This is George Morris’ third solo release since leaving Satin Peaches, and it is clear that he keeps learning from each album. As a result, we have an album close to perfection. Working with producer Zach Shipps (Electric SIx, Mood Elevator, Atomic Numbers), Mr. Morris has assembled a strong album with his best lyrics to date.

Musically, the listener will be treated to a melting pot of The Beatles, Syd Barrett era Pink Floyd, David Bowie, and a little ELO, just to name a few. However, although these are classic rock references, he makes the music contemporary. I guarantee that you will be able to put this album on in 10 years and it will not sound dated. Why? It has to do with the confidence that comes across through the music and arrangements. Shipps has added the edge and seems to be a solid filter, but make no mistake; he had gold to work with from the beginning. And he does not try to sound contemporary. While I am the subject, this is an album that cries out for vinyl. The space he creates within the music would only benefit from good old fashion vinyl. This is a result of Shipps knowing how to produce and arrange Morris’ music.

Interestingly, this is not an instantly accessible album. The first time I listened to it, I thought it was interesting and something that I want to listen to again to figure out. Then with each repeated listening, I found myself more attached to the album. Now, it is constantly being played.

Lyrically, this is not a light album. The music may not reflect the heavy content of George Morris. Growing old, loss, not feeling relevant, loss, uncertainty, loss, and then a bit more loss.  The first song, “100 Years”, reminds me of an old British Christmas movie. In the movie, The Holly and the Ivy, following a family crisis, the paternal uncle says to his nephew, “Cheer up Mick, in a hundred years we’ll all be dead”, which kind of sums up the song and the overall theme of the album. It is a song about losing friends along the way.

Following the first song, “100 Years”, about death and loss, he celebrates with the second song “I’m Alive Now”. In other words, as tough as everything is, we are alive now. Pretty heavy stuff.  Like Tobin Sprout and Sufjan Stevens (fellow Michigan native), he is grappling with the human condition. It’s quite a breath of fresh air in this age of music being background music.

This is a solid, serious, yet rocking album. He has picked up the baton from the classic rock artists and created an album that will stand the test of time. I look forward to his future work and rediscovering his old catalog.

Born and raised in Whitby, Aaron discovered music through his love of The Beatles. This led to a career in radio, writing for various publications, and ultimately a radio show about The Beatles (Beatles Universe), which ran for over four years. When not immersed in music, Aaron enjoys spending time with the loves of his life -- his wife Andrea, and daughters Emily and Linda (all of whom have an intense love of music too).
RELATED ARTICLES
album reviewsgeorge morris
8.0