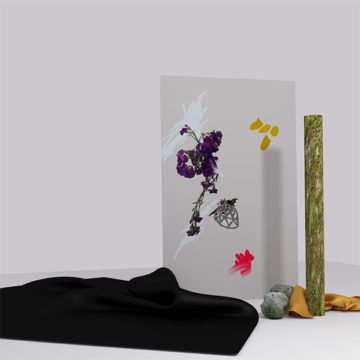 Heba is the debut album for Danish quintet, Lowly. Their previously released singles and EP teased us to their complex and blissfully ethereal nature. Composed of lead vocalists Nanna Schannong and Soffie Viemose, alongside musicians Kasper Staub, Thomas Lund, and Steffen Lundtoft; each musician carries with them experience from their past projects and a shared vision for the future.

Heba starts on a high note with “Still Life”, featuring soaring synths, stylistic sampling, and lovely vocals. The expansive and spacious vocals of Schannong and Viemose coalesce into an immersive experience, while backed by delicate percussion and luxurious strings. A vocal sample of soprano Anna Maria Wierød adds to the sheer scale of their sound and allows this song to lure you further into the album.

Deeper into the album you start to get a feel for Lowly’s atmospheric and borderline orchestral vision. Their use of instruments, both synthesised and real, produces a massively full and compelling audible texture. At some moments they echo the sophisticated and ambient sound of Beach House while other moments feature lyrics reminiscent of Morrissey.

Lyrically, Lowly can be a bit abstract with some of their lyrics, conveying a sensation rather than a concrete concept. On their track “Deer Eyes”, which was released as a single last year, we get the relayed chorus, “have you ever felt so lonely that you could map it on your body?” which presents a discernible explanation as to the general feeling of the song.

“Stubborn Day” is an interesting track as it moves from relaxed and ambient to an upbeat dream pop moment. Other songs, such as “No Hands”, showcase the emotional capability of Lowly with exceptional vocals, whirling synths, and even a saxophone. The eventual chorus presents the line “I’ve got no hands to prove you wrong”, a lovely sentiment that is sung alongside Morse code and a subtle saxophone.

In anticipation of Heba’s release, Lowly released music videos for “Word” and “Prepare the Lake”, which showcase visuals that are as artful and, occasionally, as cryptic as the album.

Overall, Heba is an exceptionally impressive debut album. Lowly has showcased their manifesto and will hopefully continue to produce delicately structured dreamy songs that vacillate between vintage, modern synth, and indie pop.

I am an Edmonton based musicophile and photographer who loves experiencing music whether it's live or on my turntable. I play seven instruments and go to a lot of concerts.
RELATED ARTICLES
album reviewsbella unionlowly
9.0