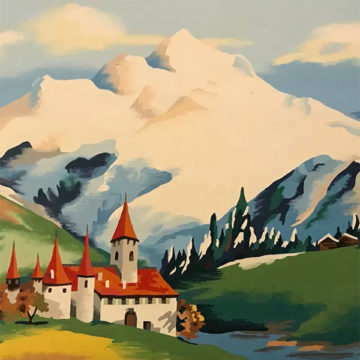 Gone From Here is Gary Daly’s debut solo album. Daly, of course, one of the founding members of China Crisis, a group still very much active and still producing incredible music. Their most recent release came in 2015, Autumn In The Neighbourhood. On this album, Daly works with three producers, David Berger, Carl Brown, and Brian McNeill, who have an understanding of what Daly wants to achieve, and the end result is a well-produced album. Mark Pythian (who has worked with China Crisis in the past), is able to take the many sounds combined on this album and present a perfect mix and balance.

On Gone From Here, Daly is able to further explore his excursions into melodic music with deeply personal lyrics. As usual, the combination works. There is not a weak song on this collection. It is a well-crafted album full of pop, jazz and experimental music. All these genres come together to form a very cohesive and engaging albums. He also receives some help from noted musicians, such as Tom Moth (Florence and The Machine) and Chris Hutchinson (Outfit)

Lyrically, Daly is not afraid to go into some darker corners. “In The Cloudy Domain”, for example is a moving and sad song full of poetic imagery of facing pain. “Don’t want to hear about it, don’t want to think about it too”, yet he does both. Set to beautiful piano and well-orchestrated, it creates an atmosphere that is beyond words. He revisits this theme a little later with “Dead Of Night”.

There are a couple of surprises as well. The main surprise is “Carousel Of Stars”. The song features the wonderfully talented John Campbell of It’s Immaterial, and the song becomes a sort of sequel to It’s Immaterial’s classic, “Driving Away from Home (Jim’s Tune)”. Daly inserts his own magic and the result is a stunning and heartbreaking song. It also features a brilliant sax solo from Eric Animar (China Crisis). The other surprise is the short, but impactful instrumental “Transition Peace” (great play on words) that adds a great deal to the flow of the album. It is experimental yet accessible at the same time.

Daly gets some assistance Gone From Here, but it is clearly his album, his vision, and his direction. His vocals are as good as ever, and his songwriting skills seem to get better with each album he does. Gone From Here is a brilliant debut album and I am hoping, an indication of what is to come.

Born and raised in Whitby, Aaron discovered music through his love of The Beatles. This led to a career in radio, writing for various publications, and ultimately a radio show about The Beatles (Beatles Universe), which ran for over four years. When not immersed in music, Aaron enjoys spending time with the loves of his life -- his wife Andrea, and daughters Emily and Linda (all of whom have an intense love of music too).
RELATED ARTICLES
album reviewalbum reviewschina crisis
8.0