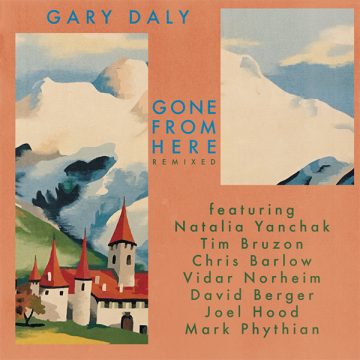 In the 1980’s, many ‘new wave’ bands released both 45’s and 12-inch singles featuring remixes of the same song. Among those who did were China Crisis, and some of their remixes are some of the best of that decade. “Tragedy and Mystery”, “Working With Fire And Steel”, and “King In A Catholic Style (Wake Up)” are three examples of songs that benefited by being extended and remixed.

For Gone From Here Remixes, Gary Daly dips into his past and has released an EP of four songs remixed by some very established artists. All of the songs originally appeared on his recent release Gone From Here. One track, “Time It Takes” gets three different mixes, while the other songs just have the one remix. Although they make for some interesting listening, I am not so sure the songs benefit from the remix treatment.

That is not to say that this is not a good EP, quite the contrary, but the songs do not benefit from the being remixed. Tim Bruzon (Wave Machines) is the clear highlight with his remixes of “I Work Alone – Das Boot Remix” and “Low Tide – Silhouette Mix”. In both cases he attenuates everything that made the songs incredible in the first place, while bringing out even more beauty.

Also worth noting is the opening track, “Time it Takes – Thelonius Mark Mix”. Here producer Mark Phythian and Montreal’s Natalia Yanchak (The Dears) take a much more dance-oriented approach to the song, while the other two mixes of the song that Yanchak has done with Chris Barlow (“Time It Takes – The Stars Look Very Different Today”) and Joe Hood (“Time It Takes – J’taime Mix) are both stripped-down, and have more of a chillout/ambient feel. Again, all work but add little to the original song.

David Berger and Vidhar Norheim’s remix of “Antony – Romeo Mix” is a beautiful way to end the album, and more than any other song harkens back to China Crisis.

In the end, it is an EP of remixes that fans will enjoy but it is doubtful that it will bring new fans to the original album. However, it is well worth downloading and enjoying, and that may just be the actual goal of the EP.

Born and raised in Whitby, Aaron discovered music through his love of The Beatles. This led to a career in radio, writing for various publications, and ultimately a radio show about The Beatles (Beatles Universe), which ran for over four years. When not immersed in music, Aaron enjoys spending time with the loves of his life -- his wife Andrea, and daughters Emily and Linda (all of whom have an intense love of music too).
RELATED ARTICLES
album reviewalbum reviewschina crisis
8.0