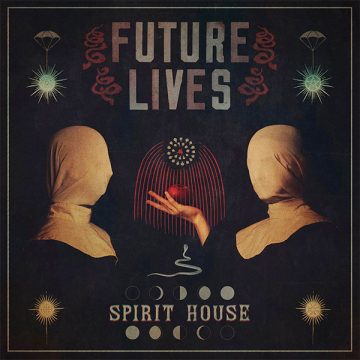 Spirit House is the followup to Future Lives debut album, Mansions. One would think the latter would be very hard to top, but top it they did. Future Lives is a project that was started by former King Of Prussia frontman, Brandon Taj Hanick. Here, he enlisted help from Annie Leeth, Nicholas Mallis, John Neff (Drive-By Truckers), Nick Robbins (Velveteen Pink), Cameron Steuart, Danny Padgett (Cordis) and Sarah Robbins. It is an alt-Americana supergroup in some respects. Like all great supergroups, Hanick brings everyone together to create a cohesive and simply stunning sound.

Spirit House also benefits from the production talents of Noah Georgeson, who is credited as assisting with recording and mixing. He seems to have an understanding of this band and is able to bring to the foreground everything great about them. He has created a space for the band and yet one can hear his influences in the arrangements of the songs, especially in the opening track, “Huckabee”. It is an incredible song, which  starts with a sparse sound, but quickly builds and flushes out the remarkable melody.

The album title is interesting as well, as a ‘spirit house’ is known to be a small, beautifully decorated shrine built to appease spirits found in Southeast Asia. Lyrically speaking this album could be its own Americana ‘spirit House’.  Listen to “The Weight Of An Endless Morning”. Not only a great title, but the song seeps out of the speakers and here is a perfect example of the lyrics and music coming together to evoke those feelings of life’s struggles.

Perhaps the biggest surprise of the album is “Motherfuckers”, an angry bit of rock featuring a perfect arrangement and some very fine vocals. Any song that brings up Max Headroom is going to get my approval. The guitar work here is quite inspirational as well. It is a stunning, coming early in the album, and while the rest is much more peaceful, it fits and is essential. This is the beauty of Spirit House, it takes you into different corners of life.

Spirit House is one of the best albums released thus far this year. It is, quite simply, amazing There is so much to listen to that as soon as the album finishes, you may be hitting repeat. Each song grows on the listener with each spin and it is an album that draws you in and holds you. Hanick and company have produced a near perfect album.

Born and raised in Whitby, Aaron discovered music through his love of The Beatles. This led to a career in radio, writing for various publications, and ultimately a radio show about The Beatles (Beatles Universe), which ran for over four years. When not immersed in music, Aaron enjoys spending time with the loves of his life -- his wife Andrea, and daughters Emily and Linda (all of whom have an intense love of music too).
RELATED ARTICLES
album reviewalbum reviewsfuture lives
8.0