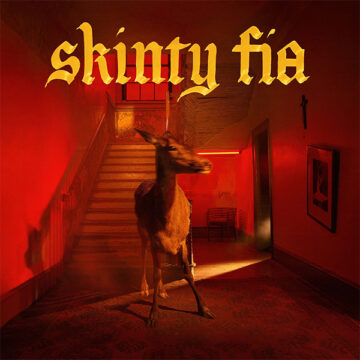 Fontaines D.C. got their name from The Godfather character Johnny Fontane, a singer and actor played by Al Martino. They altered the spelling and added the D.C. when they discovered a band in Washington already had the name The Fontaines. D.C. stands for Dublin City, where they are based. The Irish band formed in 2015 and started releasing singles that year. In 2019 they released their debut album, Dogrel, and Skinty Fia is their third studio album following the hugely successful A Hero’s Death (2020). They also released a live album last year (Fontaines D.C. Live at Kilmainham Gaol).

Fontaines D.C. consists of Grian Chatten (vocals), Carlos O’Connell (guitar), Conor Curley (guitar), Conor Deegan III (bass), and Tom Coll (drums) and have developed their own post-punk sound.  And with Skinty Fia the group continues to grow and incorporate so many different aspects into their music. The energy is still there, the intense socio-political lyrics and the intense playing. But there is so much more to this album.

The title, Skinty Fia is an Irish phrase, which translates to ‘the damnation of the deer’. The deer is featured on the front sleeve and on their website. For the record, the Irish Giant Deer is extinct and the band certainly focuses on Ireland and Irishness on the album. The band focuses on the privatization of culture, which may cause Ireland to become like their Giant Deer. The album opens with “In ár gCroíthe go deo” (which translates to ‘In our hearts forever’) and the opening line “Gone is the day/gone is the night” which sets the stage. Opening with basically vocals, with the backing music building throughout the song certainly lays the groundwork for what the listener is about to hear.

Fontaines D.C. are not afraid to express themselves musically and lyrically. And as good as the music is (and it is quite brilliant), the focus here is the lyrical content. Chatten’s vocals are stunning as he delivers very potent lines. “But this island’s run by sharks with children’s bones stuck in their jaws” sings Chatten in “I Love You”, a song of warning to Ireland. And again, the music matches the sentiment. It is not a light album. It is dark and like classic albums of its kind, it heeds a stark warning. But the impact reaches beyond Ireland. They write about Ireland, but the same sentiment applies the world over.

Skinty Fia is an important album, perhaps the most important album of the year. Fontaines D.C. have come up with incredible work. This is an album that demands and requires your attention, and gives their listeners a great deal of credit to absorb the messages. Of course, they do it with excellent playing and extremely melodic songs. Like classic Irish rebel songs, important messages are surrounded by those incredible melodies. Fontaines D.C. are stating their case and laying it out for all to see. A painfully honest album by a group who are concerned by what they have experienced. They are not preaching or offering answers, but they are posing the important questions. It is hard to believe it is their third album, as groups try for decades to write and record such a powerful album. Fontaines D.C. have succeeded and this is the mark of a truly great band, the ability to grow and develop as they have in a very short time. Although it is early in the year, this album already has my vote for album of the year.

Born and raised in Whitby, Aaron discovered music through his love of The Beatles. This led to a career in radio, writing for various publications, and ultimately a radio show about The Beatles (Beatles Universe), which ran for over four years. When not immersed in music, Aaron enjoys spending time with the loves of his life -- his wife Andrea, and daughters Emily and Linda (all of whom have an intense love of music too).
RELATED ARTICLES
album reviewalbum reviewsfontaines d.c.
8.0