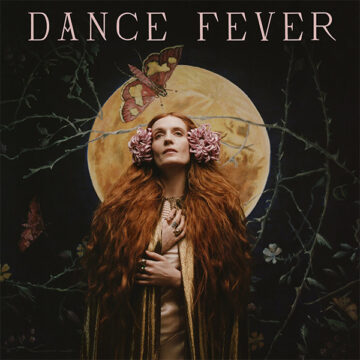 Florence + The Machine has always found the midway point between her classically-trained vocals and accessible dance pop. Her medieval, haunting croon feels familiar as ever on her fifth record, Dance Fever, a worthy yet unsurprising addition to her expansive canon.

Dance Fever succeeds at producing subtle twists on formulaic tracks, namely the cascading synths on “Free”, the snap-driven beat of “Prayer Factory”, the country twang that underlies “Daffodil” and the easy-listening, destined for a film soundtrack ballad, “The Bomb”. Welch flirts with working outside of the box on each of these tracks, but never really pushes herself past her limits.

The inspiration for Dance Fever comes from the notion of “choreomania”, a Renaissance occurrence where near-thousands of people would dance together to the point of exhaustion. The interpretation of this is quite literally projected onto the track named after the phenomena, when Welch sings “I just kept spinning and I danced myself to death”. Ironically, though, the album’s pace is haphazard. There aren’t really any songs here that embody this long-form, exhaustion-inducing dance craze obscurely plucked from a Medieval textbook. Instead, the album leaves space for Welch to echo and call out her unconventional melodies and jaded lyrics. “It’s good to be alive, crying into cereal at midnight” she muses on “Girls Against God” over strumming guitar and the occasional hi-hat tap. Like most tracks in her general repertoire, this one is built on the promise of its gradual incline to symphonic joy. Recent single “My Love” feels like the album’s most danceable and energetic track, relying on an incredibly erratic horn section to highlight the brilliant vocal cacophonies Welch mixes in here. It is, unfortunately, a rare instance amongst an album that feels mostly hesitant to get where it intends to head.

In the end, Dance Fever feels unmistakably like a Florence Welch record, but after five outings with significant space between releases, it does feel odd that all of Florence + The Machine’s music blurs from record to record. There is no denying that Welch’s voice and songwriting instincts are captivating at base level but there is nothing distinct here that begs for multiple listens. Those that are familiar with her past body of work will likely feel the exact same way about Dance Fever as they have with any other Florence + The Machine album prior – lots to adore but very little to remember.

Robert Defina is an avid critic both on paper and in person. He spends more time writing album reviews than he does worrying about his future. He hopes that this sort of procrastination never grows old.
RELATED ARTICLES
album reviewalbum reviewsflorence & the machine
9.0