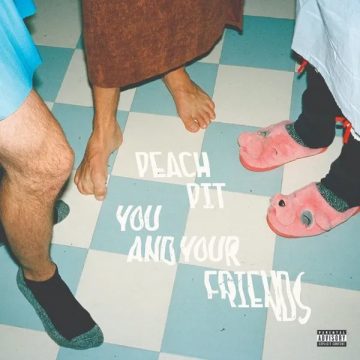 Peach Pit
You And Your Friends (Deluxe Version)
Columbia Records

With the release of their sophomore album You and Your Friends, Vancouver-based indie darling Peach Pit cemented their reputation as upcoming indie rockstars. Building on the smooth bedroom jams of Being So Normal, Peach Pit walks the line between playful and serious.

Earlier this month, they released the deluxe version of You and Your Friends, which includes three previously unreleased tracks. The three new songs include fan favourite “Psychics in LA,” which the band frequently performed live on their world tour over the past year.

It is easy to hear why this is a staple in their live shows. Peach Pit has rarely rocked so hard, leaning into the gritty garage-pop sound that has defined much of their music. “Psychics in LA” features some fiery guitar solos by guitarist Chris Vanderkooy and punchy vocals from Neil Smith, but the real standout on the track is drummer Mikey Pascuzzi. While Pascuzzi typically sticks to simple drum patterns, he absolutely pounds the drums on “Psychics in LA,” bouncing between time signatures and throwing in creative fills throughout the song.

While “Psychics in LA” is the highlight of the three new tracks, “Adidas” and “Denny’s Garage” are both solid. “Adidas” is a darker jam, leaning more into moody psych rock, while “Denny’s Garage” is straight garage rock, featuring loose production, heavy bass, and surf guitars.

While the so-called deluxe version only offers three new tracks, they are good ones. Consistent in their aesthetic and the quality of their music, Peach Pit is a rising star.

Kieran Davey is a freelance writer and music enthusiast from Vancouver, Canada. He particularly enjoys alternative rock, groovy hip-hop, and basically any music from the 60's. Aside from reviewing music, he also loves playing guitar and spending time in nature.
RELATED ARTICLES
album reviewalbum reviewscolumbia records
8.0