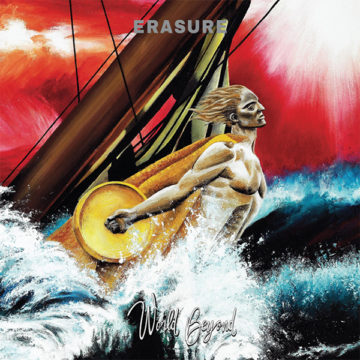 In 2017, Erasure released their 17th studio album, World Be Gone. It was a big success, both critically and commercially in their native U.K. (it made the Top Ten). Vince Clarke, the one half of Erasure who is responsible for the music end of the band, had an idea to record an orchestral version of one song as it was being issued as a single. That idea grew into this album, World Beyond, an orchestral interpretation of the album World Be Gone. To achieve this, Erasure teamed up with Echo Collective and the end result is this remarkable album.

Erasure has been around for a long time, their first album came out over 30 years ago, and they are still experimenting with their sound. They have recorded acoustic, country and cover albums. In other words, they have never been just an electro band. And they have worked hard to not be pigeon holed in one genre. Sure their music is based in electronica, but they are much more than that. Here they enter into a sound made of live strings and it works. This should not come as a surprise. Clarke has always written incredibly strong melodies and vocalist Andy Bell has written introspective and intelligent lyrics.

Erasure joined Echo Collective in their native Brussels to record the album. This is not simply a remix of their last album, but a brand new recording of the songs. This allows Erasure to come at the songs very differently. Using a neo-classical string band has forced them to revisit the songs and come up with new arrangements. Although the basic melodies are still there, the emphasis is different. The songs are not meant to dance to on this album, but rather to listen and digest. Often his lyrics get lost in the dance beats and are not at the fore front.

This is a shame, as he has always been a brilliant lyricist. Over the years he has grown and developed into a poet. Each song reads like a poem. Look at “Take Me Out Of Myself” as one example. “Take me out of myself,” he sings. “‘Til I feel like I’ve got everything under control.” Beautiful words, and when he sings them, set against a quai classical backing, it sounds magnificent. And vocally, Bell has never sounded better.

Playing and singing with an orchestra or a string band is nothing new. It has been going on for decades. Mike Oldfield’s The Orchestral Tubular Bells (1975) is a particular favourite of mine. And the reason that album worked and this album works is because it is a complete album, not a greatest hits compilation with an orchestra mixed in (as with any of the recent Philharmonic albums with Elvis, Roy Orbison or Aretha Franklin releases). Erasure are part of the creative process and made this a separate and individual album. Thankfully they even renamed the album to signify that it is a stand-alone album.

Clarke and Bell deserve a great deal of credit for continuing to push the envelope and branch out into new arenas. This album works. It is a brilliant album, and although I do not like to compare, I think World Beyond is superior to the album World Be Gone. On this album they are going for a different audience and a different emotion.

It is good to know that Erasure continue to grow and develop. One can only hope they are around for another three decades. I think whatever direction they go in next will be exciting.

Born and raised in Whitby, Aaron discovered music through his love of The Beatles. This led to a career in radio, writing for various publications, and ultimately a radio show about The Beatles (Beatles Universe), which ran for over four years. When not immersed in music, Aaron enjoys spending time with the loves of his life -- his wife Andrea, and daughters Emily and Linda (all of whom have an intense love of music too).
RELATED ARTICLES
album reviewsandy bellerasure
9.0