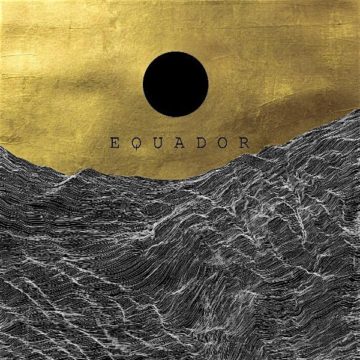 London-based Equador is producer Henry Binns of Zero 7 and vocalist Bo Bruce of The Voice UK fame. Equador’s new EP Tribal War follows up their 2016 debut Bones of Man with warm, downtempo electronica that’s got some passion. Bruce’s spectral voice introduces the three-song EP, conjuring an aura of calm on opener “Belly Up” before decisively cutting through the mix: “Oh, promise me light, promise me day, here to stay?/Clear as the night, nothing you say leaves a shadow/Your words mean nothing at all.” Gurgling synths and a chirping guitar buoy along a dubby beat. “Belly Up” is unassuming yet very catchy.

I liked second track “Treble Oh” instantly; it’s a glorious single. Bruce’s voice has been compared to that of Dolores O’Riordan, Alanis Morissette, and Dido, but on “Treble Oh” she sounds more like Sarah McLachlan or Shuhada’ Davitt (Sinéad O’Connor). Regardless of any similarities, Bruce’s voice has tons of character—the unexpected major chord resolution in the chorus is thrilling—and she brings emotion to a song about the existential turmoil of life on finite Earth without being heavy-handed. Similarly, Binns has crafted a pop song with a complexity that matches Zero 7’s best production work without overstuffing it (for which his other group has been criticized). Recurring segments of garage-y beats create an illusion of the passage of time, dividing the track into narrative episodes progressing, as Earth does, towards a well-developed ending.

The elegiac, hymn-like “Prisoner” has a mystical quality that recalls Massive Attack’s “Teardrop.” The ballad’s harpsichord-guitar sound and Bruce’s chant weave a spell of uncertainty. A trumpet solo temporarily suspends the track in mid-air before a lone choirboy coda ultimately breaks the spell. Though the hopeful resolution of “Prisoner” is somewhat incongruous, after three high-quality tracks Tribal War definitely ends too soon.

Charles T. Stokes is a nonprofit resource development coordinator and donor researcher based in Denver, USA. He’s also a tennis player and writer looking to make a racket with his own noises. “There are places in the world where one cannot publicly listen to or perform whatever music they choose without fear of harassment or prosecution. The freedom to write about new music is power, a privilege.”
RELATED ARTICLES
album reviewalbum reviewspegdoll records
10