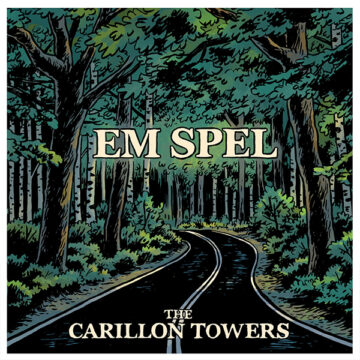 Em Spel, or Chicago artist Emma Hospelhorn doesn’t seem to be a big fan of social media. Whether this will have an impact on the word spreading out about her debut solo album The Carillon Towers, remains to be seen, but the fact is – the word should definitely spread.

You can categorize The Carillon Towers in that wide encompassing category of singer songwriters, but it is by no means what some listeners might perceive as a ‘standard’ singer songwriter album.

Before the album, Hospelhorn was making a name for herself as a flautist and multi-instrumentalist on the Chicago avant-classical music scene, and you can hear quite a few classically inspired elements throughout the album. Yet, Hospelhorn doesn’t limit herself to just classical music or acoustic instrumentation, as the rhythm section and electric guitar, like on “Promises”, give her song yet another dimension.

At the same time, Hospelhorn is able to integrate her seemingly disparate musical inspirations into quite a unifying, but different than usual sound, making The Carillon Towers an intriguing and engaging listen.