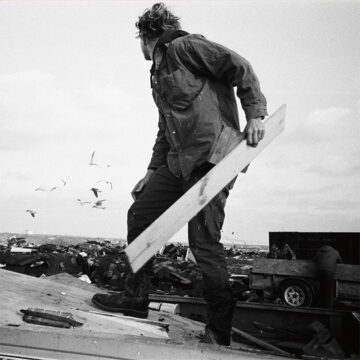 “I grew up in a small town between nowhere and nothing. By reputation, people move to Florida to run away from their problems, but instead of leaving them behind they bring the same problems with them. These are the people I grew up with, people struggling to start life over in a place promised as paradise.”

That is how Thomas Dollbaum from Florida (now residing in New Orleans) describes his debut album Wellswood. Very often, artists use big words to describe their work and unfortunately do not really (or fully) back it up with music. Dollbaum does.

While on the surface Dollbaum’s music is calm and you can say ‘Florida sunny,’ there’s some sort of unrest, trouble, and loud guitars popping up unexpectedly – American Gothic in its prime, if you will. Essentially, if we use Dollbaum’s words, behind the sun and calm in his ‘between nowhere and nothing‘ there’s real people with problems which he is able to depict both with his music and lyrics.

Not that Dollbaum is an outsider looking in. He still runs his own carpentry business, his song characters are part of his daily life.