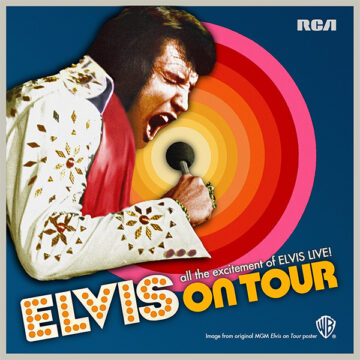 From January 1972 through to November 1972, Elvis Presley performed 96 concerts in 15 cities, which included his famous and quite frankly, triumphant shows at Madison Square Garden. Several of the shows were recorded and filmed. The film Elvis On Tour,  which featured segments supervised by Martin Scorsese, debuted in November of 1972 and became the only Presley film to win an award (it won a Golden Globe for best documentary). There was no soundtrack and the only concerts released were the shows performed and recorded at Madison Square Garden. That has been corrected with this seven-disc set. Four CDs of concerts, two CDs of rehearsals, and one DVD of the classic Elvis On Tour.

A couple of things come to mind when listening to this box set. Elvis seems to be enjoying himself. He has fun with the songs, which can be heard in the rehearsals, and has fun with his audience. The other thing that one notices is that he did not use these shows to promote his current albums. In fact, many of the songs he performs on stage were never recorded by Presley in the studio, or at least released during his life on his studio albums. In fact, in 1972 (during this tour), Presley had one of his biggest hits, “Burning Love” but was only performed a handful of times during the tour. The rehearsals are quite interesting, by the way, to hear Presley grapple with a new song. “Here we go,” says Presley. This is quickly followed with “wait, wait, I lost…” The live version of the song in this collection (Live at Greensboro Coliseum, Greensboro, NC – April 14, 1972) is actually exciting and brilliant. Again, the excitement comes through very clearly.

This is what makes this box set so wonderful–hearing Elvis with his rocking and swampy version of “Polk Salad Annie” and his lovely rendition of “Bridge Over Troubled Water”. He is singing what he loves and clearly making the sets full of songs he wants to sing.  Of course some of his hits are here (“Hound Dog”, Heartbreak Hotel”, “All Shook Up”, “I Can’t Help Falling In Love With You”, “Suspicious Minds”) but this is not a ‘greatest hits’ show. Quite the opposite. It is exciting hearing Presley take on “Never Been To Spain” or “Proud Mary” or even “Until It’s Time For You To Go”, which was featured on his then current studio album Elvis Now, and was a top 40 hit for him. And of course, the majesty of “American Trilogy” is stunning.  “See See Rider” may just be the greatest concert opener of all time. It just works after the over the top intro of “Also Sprach Zarathustra (Theme from 2001: A Space Odyssey)” which opened all of his concerts.

This new box set of previously unreleased concerts and rehearsals demonstrates that Presley was a strong live performer. He had a tight band and excellent backing singers and the songs were arranged beautifully. There is also an element of fun on stage and the crowds certainly enjoyed themselves. Casual fans may find the additional rehearsals a bit much, he does rehearse “For The Good Times” a lot) but these rehearsals provide an insight into his creative process and just how much Presley did in terms of arranging and producing his music. Elvis On Tour is an important document of an historic tour. It is great to have complete concerts included and again, the differences in the shows are interesting. Songs added and dropped as the tour rolled on. Presley toured a great deal in the 1970s, and there are some fantastic concerts during those tours as well, but the 1972 tour stands as the year Presley got back out on the road and had something to prove. He succeeded and Elvis On Tour shows you why.

Born and raised in Whitby, Aaron discovered music through his love of The Beatles. This led to a career in radio, writing for various publications, and ultimately a radio show about The Beatles (Beatles Universe), which ran for over four years. When not immersed in music, Aaron enjoys spending time with the loves of his life -- his wife Andrea, and daughters Emily and Linda (all of whom have an intense love of music too).
RELATED ARTICLES
album reviewalbum reviewselvis presley
8.0