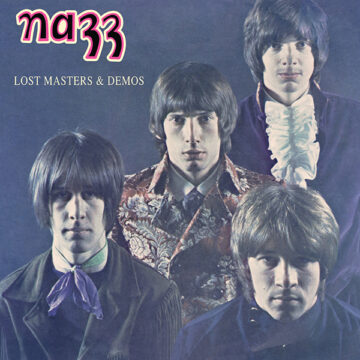 Nazz exploded on the scene in 1967 with their debut single “Open My Eyes”, which was a commercial failure at the time but has gone on to legendary status. And rightfully so, it is a brilliant record and in hindsight stood out in 1967 as it was not psychedelic but also garage rock. It was definitely influenced by The Who, and still managed to have its own distinct sound.

Nazz was founded by guitarist and principal songwriter Todd Rundgren and bassist Carson Van Osten. Thom Mooney (drums) and vocalist/keyboardist Robert “Stewkey” Antoni joined and the band was born. They would go on to record three albums and call it quits in 1970 although their third and final album would be released  in 1971. And while none of their albums or singles achieved success, individual members went on to quite popular and important careers, especially Rundgren. He would have a hit with “Hello, It’s Me”, when he re-recorded it as a solo artist although it was originally released by Nazz on their debut album in 1967.

Purple Pyramid Records has assembled a box set of unreleased material from the band and has assembled their second album  (Nazz Nazz, 1969) to be what the original album should have been. It is  interesting to hear Nazz Nazz in the original, and previously unreleased version.  Nazz Nazz was originally recorded as a double album, but it was trimmed down to a single album. Many of the songs from the original double album found their way onto the third and last Nazz album, Nazz III.  But there are a lot of other goodies in the box set.

Lost Masters & Demos serves as an historic document more than an album to win over new fans. Sometimes the sound quality is not great, for example “Hello, It’s Me (Alternate Version – John Kurland)” does not sound great but the version is different enough from the released version to make it interesting and to hear how the song developed. However, other songs sound fantastic, like “Magic Me” that explodes with Rundgren’s guitar. It is not vastly different from the version released on Nazz III but it is powerful and worth three minutes of anyone’s time. However, the John Kurland alternate version of “Magic Me” shows how the song became what it is today. Again, with this track, what is lacking in the sound quality is made up with the power and energy of the song.

But it is the entire album that fans will be wanting to hear. Here is the uncut, original double album as Rundgren intended. It has been reported in articles that the fights over the album caused the band to break up following the recording/release of the album. As a single album, it is a tight, classic garage rock album. Here as a double album, one can hear more experimentation from Rundgren who mixed the album and tried to sequence the tracks. It becomes a very different album. Using original master acetates, the album is reconstructed. Here the sound is fantastic. From the opening drums of “Forget About It” until the last track, the 11-min “It’s A Beautiful Song”, one can hear Rundgren’s vision for their second album. And to my ears, the songs fit together better on the double disc than having two separate albums.

Lost Masters & Demos is a welcome addition to a far too small discography of Nazz. Hearing the original double clearly shows that this band had a lot more to do but the band called it quits. This album does not detract from  what the band has already released, if anything it adds a new dimension to this band. And, as with his solo work, Rundgren was ahead of his time with the sound of the band and what he wanted to accomplish with the group. He would go on and do a great deal with his brilliant solo career but Nazz has a very special place in his history. This album demonstrates the greatness of the band but also the potential of Nazz.