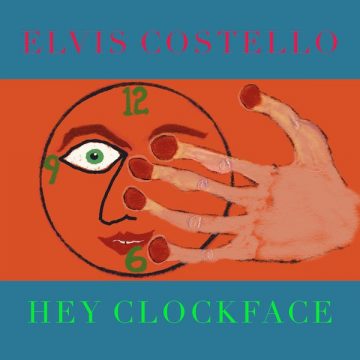 Over the last 40 plus years, Elvis Costello has produced some of the most influential and varied work known to pop music. His virtuosity and willingness to change have given him legendary status that only few could challenge.

On Hey Clockface, his 31st studio release, we find Costello continuing to add new flavours to his ever-growing discography. On “No Flag” he combines hip hop backbeats with a spy rock guitar licks, while on album opener “Revolution #49” we hear delightful Middle Eastern flavours accompanied by spoken word.

While the schmaltzy title-track is a bit much, his more sentimental ballads like “The Last Confessions Of Vivian Whip” and “What Is It That I Need That I Don’t Already Have?” are haunting. His maturing voice, now hoarse, brings a certain barroom balladeer vibe to the album.

Costello, who is certainly aware of the legendary shadow his previous masterpieces cast over his newer work, is not afraid to pay tribute to the past.  “They’re Not Laughing At Me Now” would have fit perfectly on his 1986 classic, Blood & Chocolate while the spy rock guitar lick on “No Flag” must be a nod to “Watching The Detectives” It is this combination of new and old that make this record an engaging listen.

If you’re not expecting this record to rival his ‘70s or ‘80s output, which would be near impossible, then you are certain to enjoy this outing. Hey Clockface isn’t going to change any lives, but there is a comforting feeling knowing Elvis Costello is still making new music.

As a child growing up in the suburbs, Ryan found music as a way to soothe his boredom. After first hearing AC/DC at the age of 10, he was hooked on music. Tracing its roots to the ‘50s, he became obsessed with Elvis, Buddy Holly and Chuck Berry. Somehow that led to grunge, then psych-rock, then jazz, etc. The list goes on and on and his collection of vinyl records continues to grow.
RELATED ARTICLES
album reviewalbum reviewsconcord records
8.0