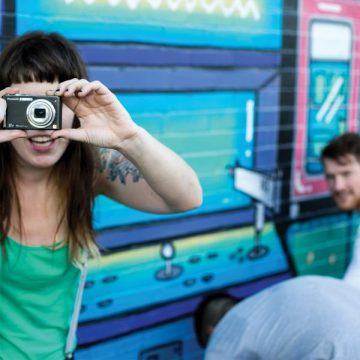 The debut release from Chicago-based Earth Girls is 22 minutes of Retro Punk-tinged Power Pop packed into 12 tracks. The abruptly short songs are simple enough to feel familiar, but structured in a way that really messes with my senses. From start to finish, it feels like you’re either jumping in or cutting out at the second chorus.

Albeit attention grabbing, I feel the relentless high tempo and start-stop-start-stop flow of this album as a whole leaves little room to let any song stand out and stick. It all just kind of bleeds together, creating one really long song that gets a little overwhelming halfway through instead of achieving 12 exciting mini-tunes that build on each other into a sonic staircase of awesome. In other words, where some albums completely lack in continuity, Wanderlust is so continuous that it dulls down the identities of its moving parts.

The songs themselves are truly great – there’s a nostalgic sweetness to the combination of punchy chords and airy vocals that just makes you smile – but when listened to as a whole it’s just a bit too desensitizing. I feel as if tracks like “Say Goodnight” and “Don’t Let Go” would be outstanding key tracks on any album if contrasted with slightly longer or slower songs on either side.

Being a lover and supporter of short in-your-face songs, I definitely think Wanderlust is a collection of good examples of such. That said, I’d love to see lead writer Liz Panella take things to the next level by strategically arranging a record that uses alternate dimensions of sound and style to complement her energy and punch much in the same way a visual artist uses negative space to enhance the illusions in their work.

Combining a lifelong love of writing with a mutual obsession for music and marketing, Vanessa is all about inspiring artists to break personal and creative boundaries, whether it be through a writing a compelling opinion piece, mentoring and coaching developing artists to reach their potential, or building and managing strategies to take successful artists to the next level.
RELATED ARTICLES
wanderlust
9.0

by Aaron Badgley on October 19, 2018
Blancmange Wanderlust Blanc Check Records Wanderlust is the sixth album released by Blancmange since original member, and one half of the band, Stephen Luscombe left the band due to health [...]
7.0