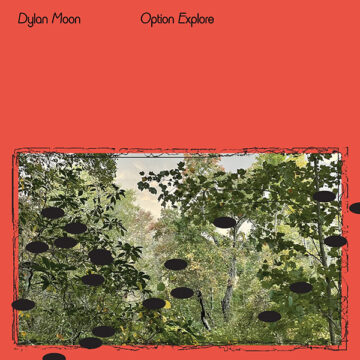 Anybody who had a chance to hear Dylan Moon’s initial album Only the Blues, from 2019 might be taken aback by what is in the grooves (or bits) of his follow-up, Option Explore.

Instead of the Syd Barret-like folk psych he seems to be gone towards the electronic stylings Animal Collective go these days for, or, if you want to be more precise, re-imagining Syd Barret for the current times. After all, he did pick up a very fitting album title – Option Explore.

But there is more to it than just bringing Barrett to this century, as option explore relies on the “explore/exploit trade-off” concept, a behavioral mechanism of foraging (“the choice between exploiting a familiar option for a known reward and exploring unfamiliar options for unknown rewards”) which has been employed within computational neuroscience and psychiatry.

And again, the Los Angeles artist sticks quite close to this definition with the 13 tracks here. Combining psych-tinged melodies with electronic grooves that go from Ambiental background to electronic rhythmic explorations (“Deep Time”), Dylan Moon seems to be – “exploring unfamiliar options for unknown rewards,” where he seems to have chosen exactly the right options to make his latest album quite an intriguing liste… and exploration.