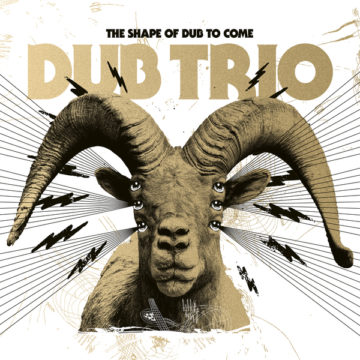 Dub Trio has been blurring genres with their music for over a decade now, and their newest album, The Shape of Dub to Come, is an admirably unique experience, but a bit too indecisive. The band is commonly regarded as simply a dub/metal fusion, and they stay true to that image throughout the first half of this album. The styles aren’t really blended, more so just stacked next to each other – they don’t so much as play dub metal, but rather play seamless renditions of somebody switching between dub and metal radio stations. However, this catch and release style works well for them; especially on tracks like “Spyder” and “Fought the Line,” which switch from atmospheric, echoing drumscapes to tight, distorted riffs at the drop of a hat, creating a unique pacing that keeps the songs intriguing. Unfortunately, some of the performances (especially the guest vocals) can feel a bit phoned in, but the knack for excellent production and killer melodies make up for it. However, by the time “Life Signs” is over, The Shape of Dub to Come feels like an entirely different album. They mostly ditch the metal almost entirely influences (spare an amazing climax on “Computery”) and explore more low key styles with a glitchy touch. It works well for “Life Signs” and “Forget My Name Dub,” which feature tasteful but nonetheless eclectic use of effects to enhance the atmospheric feel they each have. However, “Needles” and the unforgivably boring closer “Sati” stray completely from anything that made the band interesting to begin with, both of them painfully long snores that sound as if they were made by a band that had never heard or made ambient music that read the Wikipedia page for “ambient music” and then decided they wanted to do that. On The Shape of Dub to Come, it seems that Dub Trio can’t make up their mind on exactly what they want to be; it’s novel at some points, especially on the first leg of the album, but this album only goes to show that a jack of all trades is a master of none.

Quinn Brown is a writer and total music nerd. He doesn’t have any social media, but you can reach him at [email protected]
RELATED ARTICLES
album reviewalbum reviewsnew damage records
8.0