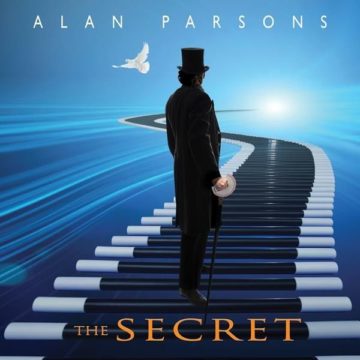 The Secret is Alan Parsons first studio album in 15 years. His last album, A Valid Path, was released in 2004. Since then he has toured and released several live albums, and also oversaw the reissue of expanded versions of classic Alan Parsons Project albums. But The Secret is a welcome return and it lives up to expectations. This is one brilliant album.

As with the Alan Parsons Project, Parsons decided to work with various vocalists and there are some surprises, such as Foreigner’s  Lou Gramm on “Sometimes” and Jason Mraz taking lead vocals for “Miracle”. They sound like they have been playing with Parsons forever and fit right in. Parsons himself provides vocals on two tracks and sells himself short by not doing more. He has a pleasant voice, perfect for the style of music.

Besides the guest vocalists, it is extremely nice to hear Steve Hackett play on the album. His appearance on a Parsons album is long overdue and fits in perfectly with the music. Again, Parsons is able to take his musicianship, although distinctly Hackett, it becomes part of Parsons’ world.

Because this is Alan Parsons, the album is extremely well-crafted, musically, lyrically, and production wise. He knows how to produce and how to mix so the songs have maximum impact. The songs all fit together like a puzzle, and this is due to Parson’s ability to use sound and melody to their fullest effect.

Parsons revisits themes, both musically and lyrically, on The Secret and that is just fine. The album opens with an instrumental (“The Sorcerer’s Apprentice”) as it should and it is a beautiful welcome into The Secret. What follows is what one would expect from Parsons. Well-crafted, melodic songs and stories. It is quite brilliant.

For my money, The Secret is a return to form for Alan Parsons. Long-time fans will enjoy this album as it does bring one back to some of his earlier work with The Alan Parsons Project.

Born and raised in Whitby, Aaron discovered music through his love of The Beatles. This led to a career in radio, writing for various publications, and ultimately a radio show about The Beatles (Beatles Universe), which ran for over four years. When not immersed in music, Aaron enjoys spending time with the loves of his life -- his wife Andrea, and daughters Emily and Linda (all of whom have an intense love of music too).
RELATED ARTICLES
alan parsonsalan parsons projectalbum review