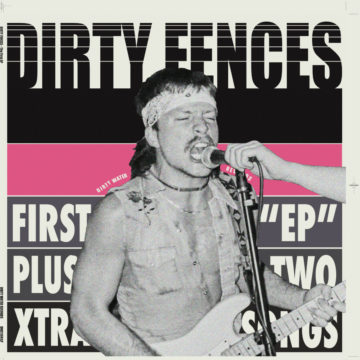 Back in 2012, New York street-level punk band Dirty Fences comprised of high school buddies from Boston Jack Daves (vocals/guitar), Max Comaskey (bass), and Max Hiersteiner (drums) and Brooklyn recruit Max Roseglass (guitar) released their first self-titled EP, a debut which was well received. Since then, they have released two full-length studio albums, gaining attention as a band who works hard and delivers when it comes to their live shows. Now, they introduce two new songs to be featured on the reissue of their debut EP, “2X2” and “Sell Your Truth.”

Along with the release of their second studio album last year, Dirty Fences went on tour, playing shows in six European countries. During a show in Italy’s capital city of Rome, the band was robbed of all its equipment and merchandise. Dedicated fans came to the rescue with a little help from social media and a GoFundMe page which garnered $16 000 in the first 24 hours. Known for their energetic live performances, it is no surprise Dirty Fences were able to surmount an unfortunate setback and jump back into performing sold out shows for equally exuberant fans. The band exudes a rambunctious, almost dangerous mentality, and bloggers rave about the energy Dirty Fences bring to their shows, noting semi-choreographed moves and fluid motions throughout their set. Their passion is reflected back in the crowds who come to see the legendary phenomenon that is a Dirty Fences live performance.

With little time to rest, Dirty Fences returned to their home of New York and began playing festivals and local shows in the fall. It was during this time that they got in contact with Dirty Water Records about releasing two new tracks which ultimately became additions to their notable 2012 EP upon its re-release. Both “2X2” and “Sell Your Truth” blend nicely with the prior 6 tracks, matching the up-tempo, ‘70s vibe, while keeping relevant with today’s rock. The reissue is now available for download and on 12” vinyl.

Emily is a sociology student at McMaster University with a passion for social change, focused on issues surrounding gender equality and societal mental health. She believes that music, whether going to concerts or listening alone, is the best way for people to feel connected. After abandoning her small-town roots for opportunities in Toronto, she intends to merge her two loves of writing and music in the hopes of satiating her wayward soul. Follow her on Twitter at @emmniic18.
RELATED ARTICLES
album reviewsdirty fences
7.0