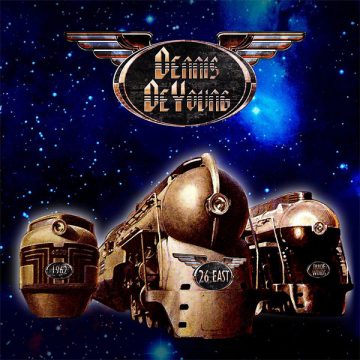 As hard as it might be to believe, this is Dennis DeYoung`s first studio album since 2009`s One Hundred Years From Now. Perhaps the time away from the studio has been a major asset, as 26 Eas, Volume 1 is his best solo album of his career and his best work including his days as lead singer of Styx.

DeYoung looks back on this album, and any similarities to his old band are purely intentional. 26 East is where DeYoung grew up in Chicago, and this album is his life story. In looking back, DeYoung is clearly looking forward with his music. Cowritten with Jim Peterik, who also plays guitar, bass, keyboards, and vocals, DeYoung taps into everything that was good about Styx and incorporates it in his own style .

Styx play a big role on this album, not the members, and no, this is not a reunion album, but the story of Styx looms large and in fact the album is a concept album of DeYoung’s life. The opening track, “East Of Midnight” could be the best Styx song since Pieces of Eight. Lyrically and musically, this is a stunning way to open the album. The musiciansip is flawless and DeYoung’s voice has never sounded stronger.

Of course it helps that he has a fantastic backup band helping him out, but DeYoung is clearly the star here and the music and lyrics are his. He even has help from Julian Lennon, who duets with DeYoung on the very Beatley song, “To The Good Old Days”.  It is nice to hear Lennon, as he has been absent from the music scene for a few years, but the two of them together form a near-perfect union.

It is quite clear that this album is near and dear to DeYoung. 26 East, Volume 1 is an excellent album,  and after all these years and so many great albums behind him, the fact that DeYoung is able to do his best work is quite remarkable.

Born and raised in Whitby, Aaron discovered music through his love of The Beatles. This led to a career in radio, writing for various publications, and ultimately a radio show about The Beatles (Beatles Universe), which ran for over four years. When not immersed in music, Aaron enjoys spending time with the loves of his life -- his wife Andrea, and daughters Emily and Linda (all of whom have an intense love of music too).
RELATED ARTICLES
album reviewalbum reviewsdennis deyoung
8.0