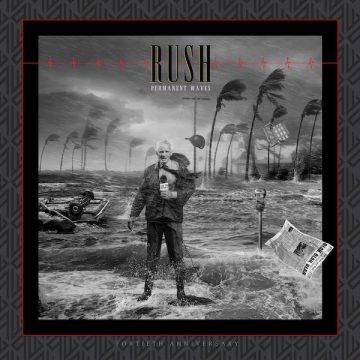 Originally released in 1980, Permanent Waves is the latest Rush album in their series of reissues, and their first release since the equally sudden and tragic passing of drummer Neil Peart earlier this year. Permanent Waves is the seventh album in the progressive rock band’s iconic discography and, like much of their music, has aged very well. Upon its initial release, the album was acclaimed by critics and fans alike and proved to be a massive commercial success for the band; furthermore, the album was best known for its lead single, “The Spirit Of Radio”. Remastered and released in a number of different editions, Permanent Waves: 40th Anniversary Edition most notably contains the original album along with 12 unreleased live tracks from their Manchester, London, and St. Louis, MO stops on their subsequent 1980 tour.

Naturally, Permanent Waves, even four decades later, stands as not only as a central pillar in the foundation of progressive rock, but also marks a new sonic chapter for Rush as they entered into the ‘80s. As the direct precursor to their undeniably acclaimed Moving Pictures released the following year, Permanent Waves, in a sense, best captures Rush entering what is one of their most distinctive creative phases as they once again define and reinvigorate progressive rock for the coming decade. Upon opening, “The Spirit Of Radio” is just as epic and grand as ever, while tracks like “Freewill”, “Jacob’s Ladder”, and “Natural Science” truly demonstrate the growing musical mastery and experimental songwriting of Rush.

The unreleased live portion of Permanent Waves: 40th Anniversary Edition features material from Permanent Waves, as well as Fly By Night, 2112, A Farewell To Kings,  and Hemispheres. This near career spanning collection of material (for the time) is a further demonstration of the incredible musicianship from each member of Rush as they enter what is their most acclaimed era. While not the best recording quality, songs like “Xandu”, “The Spirit Of Radio”, “A Passage To Bangkok”, “The Trees”, “Cygnus X-1” and “Cygnus X-1: Book II Hemispheres”, among others, acts as a fantastic representation of the Permanent Waves tour and Rush in 1980.

Similar to previous reissued anniversary collections the legendary Canadian trio has released, Permanent Waves: 40th Anniversary Edition serves as a reminder (not that anyone needed one) as to the innovation and timelessness that is Rush. The original album, remastered, proves to be just as exciting and nostalgic as one could hope, while the addition of the full-length live collection makes this reissue of Permanent Waves essential for any Rush fan.

A passion for music has always been a part of Gerrod’s life. As a young boy, he was raised on a steady diet of the music from The Chili Peppers, Aerosmith, The Stones, Prince, and others from his mum. Raised in the GTA, Gerrod continued to foster his love for music by attending a wide range of concerts and learning the drums. His unapologetic passion for music has no bounds and has spread to a wide variety of styles, whether it be the 90’s rock that sound tracked his teenage years, the jazz he studied in university, or his newfound love for hip-hop. He recently received his bachelors in music and education from York University and is passionate about writing and reviewing good (and less than good) music. Gerrod is also the drummer and songwriter for a Toronto based rock & roll band, One In The Chamber.
RELATED ARTICLES
album reviewalbum reviewsgeddy lee
8.0