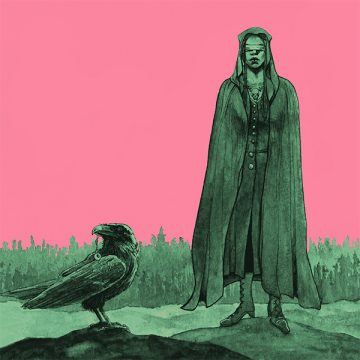 Toronto-based Cursed Arrows has released its 12th full-length release, Mage. The five-track EP includes singles “Rebuild As One” and “Haunted”, both of which were released in October of 2020, and is their first new collection of material since 2013’s Sonic Union.

Opening with lead single, “Rebuild As One”, Cursed Arrows delivers a call to dismantle oppressive institutions and rebuild a stronger, more equitable system set over ambient post-punk melodies. The song slowly builds into a grungy outro following an atmospheric verse and catchy chorus. In a complete shift, the album jumps headfirst into “Anthem” which features a vocal melody which feels reminiscent of a ‘60s pop tune built on top of a ‘90s inspired alternative rock guitar and overall tone. The juxtaposition of styles is truly unique.

Mage is primarily driven by the lead vocals switching between Jackie and Ryan Stanley, the former delivering sweet and lyrically flowing vocals while the latter bringing a raspy edge to the music. This vocal duo is at their best when the harmonies are sitting at the front of the mix and are in abundance, as best heard in “Hold Onto Your Money”. That being said, however, the strongest track is the Black Sabbath-inspired wave of distorted, sludgy, stoner rock that is “Highway of Thoughts”. The sickly-sweet vocals in front of the haunting guitars are equal parts menacing and intoxicating.

Cursed Arrows’ frustrated calls to dismantle the patriarchy and other oppressive systems that are culturally and sociologically normalized–despite being dressed up in dazzling melodies and hypnotizing harmonies – stands at the forefront of Mage. Furthermore, it remains a challenge to categorize their music as the songwriting is far too versatile for the band to easily fit as punk, post-punk, alternative, or stoner rock. Either way, Mage is a record that demonstrates a strong sense of songwriting without boundaries that has resulted in a musical experiment that stands on its own as a strong return for Cursed Arrows.

A passion for music has always been a part of Gerrod’s life. As a young boy, he was raised on a steady diet of the music from The Chili Peppers, Aerosmith, The Stones, Prince, and others from his mum. Raised in the GTA, Gerrod continued to foster his love for music by attending a wide range of concerts and learning the drums. His unapologetic passion for music has no bounds and has spread to a wide variety of styles, whether it be the 90’s rock that sound tracked his teenage years, the jazz he studied in university, or his newfound love for hip-hop. He recently received his bachelors in music and education from York University and is passionate about writing and reviewing good (and less than good) music. Gerrod is also the drummer and songwriter for a Toronto based rock & roll band, One In The Chamber.
RELATED ARTICLES
album reviewalbum reviewshaunted
9.0