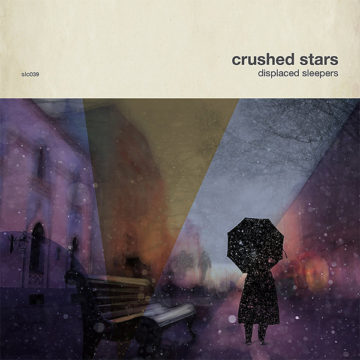 Hailing from Dallas, Texas, Crushed Stars have really delivered with their fourth and latest album Displaced Sleepers. Led by writer/guitarist/producer/front man Todd Gutreau, the band has long been known as “dream pop” darlings, but with Displaced Sleepers, they raise the bar a couple of notches. It includes some of the best melodic pop tracks packed into one album in years. Hypnotic tracks like “Permafrost,” “Celia in her Constellation”, and “Slow Parades” are close to perfect, and reflect Gutreau’s growing sense of isolation, as both an artist and a spectator in the digital age where art is consistently diminished.

Displaced Sleepers features ethereal vocals and a steady stream of infectious melodies and hooks played out amid shimmering guitars and warm clinky keyboards. Listening to the album, I found that it can actually turn into a mesmerizing experience. Along with contributions from bandmates Jeff Ryan (drums) and Jay Allen (piano), Gutreau and Crushed Stars are clearly on an upward trajectory with their latest release.

Gerry Young is President of Current Records and Management, and author of the 2011 biography Pop Goes The Weasel: Rock And Roll Off The Record, available at Indigo/Chapters, Barnes & Noble, and Amazon.com. He has recorded and managed Juno Award winning bands Martha And The Muffins and The Parachute Club among others.
RELATED ARTICLES
album reviewspermafrost
8.0