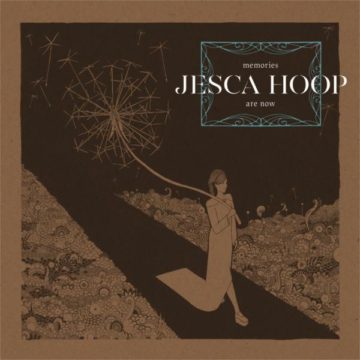 Displaced American (now in England) singer-songwriter Jesca Hoop releases this nine-track album, Memories Are Now, to critical fanfare. Having honed her craft over the last 10 years, Jesca shows us that her abilities as a storyteller are unabating, while she repackaged old themes with emotional honesty.

The album starts off with the slow tempo “Memories Are Now” that dusts us with haunting sighs as a low riff comes into play. It’s a good start to the album as Hoop showcases her vocals right off the bat. My favourite song of the album comes early; “The Lost Sky” saunters around a simple acoustic chord structure that balances nicely with Hoop’s raw vocals. It’s marvelous! In regard to lyrics, varied themes are found scattered throughout this release, such as religious oppression, which can be found on “Songs of Old” and “The Coming”. For instrumentals, Hoop shows her skills as a guitar player, going from a fuzzy country-esque sound on “Simon Says” where the interesting guitar notes are the glue that keeps the song together. On “Animal Kingdom Chaotic”, the lyric “the computer says no” sound like a line borrowed from a Little Britain sketch (UK version). “Cut Connection” reveals a great wall of sound with its plodding drum beat echoing behind the fuzzy guitar.

The calm lushness of each song wavers between dark, happy, lonely, and optimistic. Hoop keeps the production minimal and simplistic, she doesn’t bog down her work with complex arrangements or heavy lyrical symbolism or imagery. Through its deliberately simple and clear framework, one can enjoy the soft moments of each track on the album, untethered by its sculpted, emotional appeal. It’s about accomplishing a lot, and the musical pieces fit together nicely. Fast tempo songs are almost non-existent on this album; instead the tracks meander with an easy-going vibe, which give it a distinct mood.

Through the mellifluous mixing of her vulnerable, languid, and breathless vocals, metrical prose and hazy instrumental flair, Hoop continues to impress as she continues on her own path. The end result of her songwriting process (as she goes for the musical jugular) communicates clearly how talented she is, while striking a universal chord. With the idle ebb and flow of her emotional tracks, Jesca Hoop can continue to see herself alongside the ever-growing catalogue of creative, female musicians.

Insert pretentious stuff about me here. I was born at a very young age. I am pretty, funny... without the comma. Easily distracte
RELATED ARTICLES
album reviewssub pop records