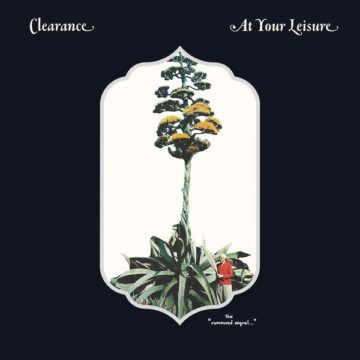 Clearance
At Your Leisure
Topshelf Records

There are some bands that simply refuse to fit into the pre-existing genres or eras of music. Clearance is one of these bands, with a new album that could have very well topped the pop charts in the ‘60s without a single eyelash being batted. With their new record, At Your Leisure, Clearance surely prove one thing: garage rock isn’t dead.

One of the most prominent features of Clearance’s “sound” is the lo fi quality to it, an effect that usually finds its way into the current markets for rap/hip-hop/trap but certainly not a lot of modern bands. This, along with addictive guitar riffs and simplistic beats, lend their music an almost trance-like quality. However fills and sudden changes of tempo keep enough variation to stop you from dozing off, along with the obscure nature of the lyrics and the tracks in general. While tracks like “Had A Fantastic” seem akin to thoughts dropped mid-sentence, lyrics such as “you concentrated like a frozen orange” appear to imply meanings hidden just out of reach, to be explored At Your Leisure.

The various elements of come together to form tracks almost, but not quite, mellow and light hearted, allowing the record to remain an easy listen that will probably remain on repeat for days. With this being just their second LP, Clearance really outdoes itself and proves to be a name to look out for.

Stan is a metalhead, musician, and freelance writer (for hire!) In that order. Yes, looks are deceiving. No, metal is not (all) about Satan.
RELATED ARTICLES
album reviewalbum reviewsclearance
9.0